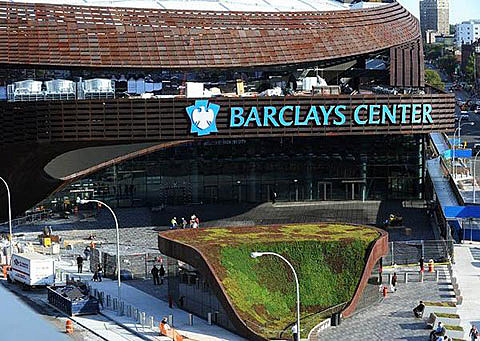 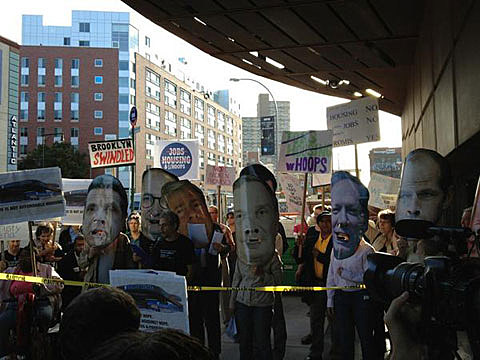 New, controversial Brooklyn arena, Barclays Center (why exactly did Barclays sponsor it?), has its invite-only, ribbon cutting ceremony today at 9:30 a.m. Protesters are on hand. Some of them may be wondering why it looks so damn rusty...

"Is it meant to be that way, with the rust?" one woman asked, squinting at the steel.

"I thought they were going to paint it," said a man who stopped to stare.

No, they are not. For the facade of the Barclays Center, more traditional materials were rejected in favor of 12,000 separate pieces of what is called "weathering steel," and that leathery brown hue, which is the arena's final finish, is not paint but an intended layer of rust.

Weathering steel -- often known by its old brand name, Cor-Ten -- develops a fine layer of rust, which then acts as a protective coating against moisture, slowing its own corrosion process almost to a stop. While it can look suspiciously unfinished to the casual observer, it has many fans in the world of art and architecture. [NY Times]

The Best part about that August 27th NY Times article is the 182 comments.

P.S. Tickets for a Nets vs Knicks game go on sale 9/24 at 10am. Tickets for the Rihanna show go on sale today at noon. Yesterday we found out Best Coast is playing there (with Green Day).