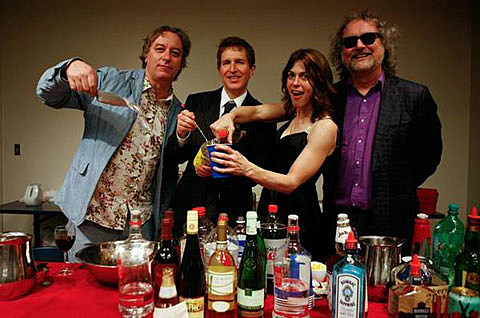 The Baseball Project understands that music heard in a sports stadium is not particularly good. And, although that wasn't the sole impetus, the rock quartet conspired to write rock songs that mostly deal with America's cherished pastime.

Veteran musicians Peter Buck, Scott McCaughey, Linda Pitmon and Steve Wynn comprise a supergroup that formed in 2008. ...Up until they started writing and recording in the same room, the group members already had a hand in each other's associated projects. For example, singer-guitarist James McCaughey, a frontman for Washington acts The Minus 5 and The Young Fresh Fellows, has collaborated with R.E.M. since the early '90s.

...Their songs range from the irreverent to the deep and ruminative, which is to say, not tailor made for a Joe Schmo at the stadium. The band's single "Past Time," has reportedly been played at Siebert Field in Minneapolis, Minnesota.

When the baseball season starts up in early April, the gang is back in session. Come this fall, The Baseball Project will have recorded 40 songs, 18 of which will appear on the second album slated for February 2011, McCaughey said. - [NJ.com]

The foursome have been releasing free material every month since March via ESPN (stream it below), and now the band is hitting the road for a pair of dates that will include Maxwell's TONIGHT (8/12, show was previously at Southpaw) and the Solid Sound Festival in North Adams, MA on Saturday (8/14).

Peter Buck won't be on tour for the trek but R.E.M. co-conspirator Mike Mills will, as they tear through their quiver of originals as well as material from The Dream Syndicate and The Minus 5. Dennis Diken with Bell Sound will support at Maxwell's and though tickets are still on sale (as they likely will still be at the door), you can also try you luck at winning a pair. Details on how to win are below.

The Solid Sound Festival this weekend in Massachusetts features a headlining set from Wilco in their "in their only East Coast performance of the summer". It also happens to be Wilco's very own festival and they'll be playing alongside Mavis Staples, The Nels Cline Singers, Avi Buffalo, Sir Richard Bishop, The Books, Mountain Man, Vetiver, a Jeff Tweedy solo set, and much more over its three days. Full lineup is below and tickets are still available. Bob Lefsetz is dying to attend and he's not even that big of a Wilco fan.

The Baseball Project stream, Solid Sound lineup, and tour dates are below...

Want a free pair of tickets to The Baseball Project at Maxwell's? Email BVCONTESTS@HOTMAIL.COM (subject: Baseball). Include your first and last name. Winner will be picked at random and contacted ASAP. Good luck!