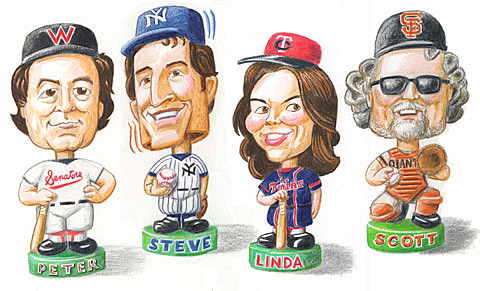 On one of the sunniest day of the year so far, Hobokenites came out in droves to eat, see local art and hear live music at the Hoboken Arts and Music Festival on Sunday afternoon...

The Baseball Project... proceeded to rip a hole through the afternoon with the sheer power of their rocking and songwriting prowess. Highlights (and there were many) included Wynn's ode to Detroit Tiger's pitcher Mark Fidrych entitled '1976', McCaughey's wordtastic 'Panda and The Freak,' and the ridiculously talented rhythm section of Buck and Pitmon.

Craig Finn (of the Hold Steady) made a truly electric guest appearance on a tune for which he penned the lyrics called, 'Please Don't Call Them Twinkies.'" He was entirely captivating and having never heard/seen him sing live before, I think I fully understand now why his band is so popular. -[Patch]

As promised, Craig Finn also showed up two days earlier at The Baseball Project's 4/29 show at the Bell House. Watch Craig sing with them at the Brooklyn show, in a video below. In between Hoboken and Brooklyn, they also played a show at Drew's House in Ringwood, NJ where their setlist included covers of both the Cramps and the Flamin Groovies. Videos from that show are also below.

And with those triumphant dates in their rearview, The Baseball Project has announced their return to NYC with a date at City Winery on June 5th. Tickets are on sale. The NYC date is part of a larger string of mostly Northeastern dates that will also include a stop in Baseball Hall of Fame home Cooperstown on June 3rd (they play a brewery there).

All of this touring is in support of their second album, Volume Two: High and Inside, which was released March 1 on Yep Roc and includes guest appearances from Craig Finn, Ben Gibbard of Death Cab for Cutie, Steve Berlin of Los Lobos, Yo La Tengo's Ira Kaplan, and Chris Funk and John Moen of The Decemberists.

All tour dates, a video of the band on "Extra" (where they play "Fair Weather Fan" and talk about being accepted by the baseball community), and the above-mentioned videos, below....