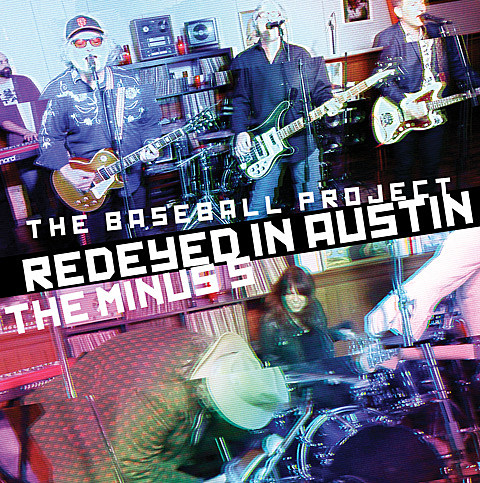 The Baseball Project, which features Young Fresh Fellows' Scott McCaughey, The Dream Syndicate's Steve Wynn and REM's Mike Mills, have a Record Store Day 12" coming out that's a split with one of McCaughey's other bands, The Minus 5 (which also includes an REM member). It was recorded at the Redeye Residency in Austin during SXSW 2014. More details from the band:

We teamed up with the Minus 5 (boy, that was easy - we didn't even have to change our socks) and our awesome label Yep Roc Records for a big ol' 12-inch mini-LP (is that a contradiction?) that captured both bands LIVE at SXSW last year. It's called RED-EYED IN AUSTIN and it's a raw and raunchy blazer, featuring not-so-secret weapon Josh Kantor all-the-way-from-Fenway on the organisms, squeeze box and piano forte. Look for our lil' baby on bleary-eyed colored vinyl way early in the morning on RECORD STORE DAY in April, at your favorite vinyl opiates dealer. Before it's gone gone gone like a Reggie Jackson moonshot. Or an ice cold bottle of Topo Chico.

With Opening Day coming up soon, The Baseball Project will be playing some spring shows, including a stop at Brooklyn's Rough Trade on May 2. Tickets for that show go on sale Friday (3/20) at noon.

The Baseball Project will also be throwing out the first pitch when the Mets host the Cardinals for a Spring Training game at Tradition Field in Port St. Lucie, FL on April 1. All dates are listed below...