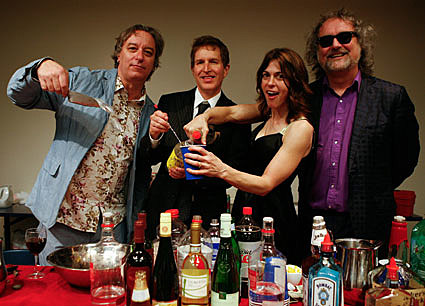 What happens when two great songwriters decide to focus their talents upon their favorite sport? You get the highly entertaining debut disc from The Baseball Project, Volume One: Frozen Ropes and Dying Quails. The album is the brainchild of Steve Wynn (Dream Syndicate, Steve Wynn and the Miracle 3) and Scott McCaughey (Young Fresh Fellows, Minus 5, and R.E.M). The two musicians were longtime fans of each other's work throughout the 80s but never met until the early 90s. Wynn recalls, "I honestly think the first time we met was side-by-side at the urinals at the Offramp in Seattle when I played there in 1992." He adds, "Scott didn't try to shake my hand."

Stream the entire album now courtesy of Yep Roc. It will be in stores on July 8th. They performed on Letterman last night with drummer Linda Pitmon and R.E.M.'s Peter Buck as the rest of their band. Peter performed at Madison Square Garden a day earlier. Watch the Letterman video below....