The Bastard Noise at MHOW (more by Lori Baily) 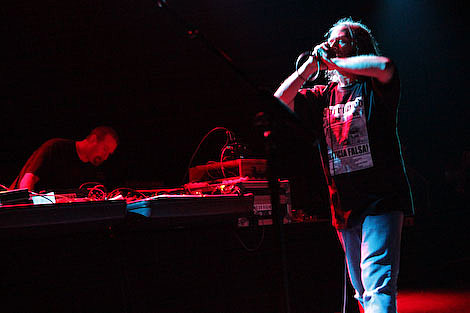 The NYC shows are dedicated to Lee Altomare, who recently passed on after complications during surgery, and whose band The Communion are scheduled to open both of them:

WE ARE DEDICATING OUR NEW YORK CITY SHOWS IN JUNE TO OUR FALLEN BROTHER LEE ALTOMARE(R.I.P.)AND HIS BAND THE COMMUNION - WE REALIZE HIS DEAR FAMILY AND BANDMATES ARE DEALING WITH THE UNTHINKABLE AS WE ALL ARE. FOR ME(WOOD), LEE WAS A TRUE BROTHER AND REAL SUPPORTER AND SO PASSIONATE ABOUT MUSIC AND LIFE IN GENERAL. HE MADE ME FEEL LIKE I HAD KNOW HIM ALL MY LIFE AFTER ONLY KNOWING HIM DAYS. BROTHER, YOU WILL ALWAYS BE MISSED AND NEVER BE FORGOTTEN. CONNELL/NELSON/WOOD - THE BASTARD NOISE

The future of the Communion is still unknown, though all dates are still listed at their MySpace.

As previously discussed, the alter ego of The Bastard Noise, Man Is The Bastard, have unearthed unreleased tracks intended for releases with Spazz and Despise You from twelve years ago.

Full tour dates and some videos are below...