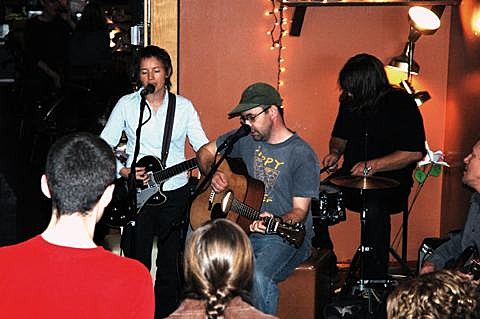 As mentioned, New Zealand's The Bats are flying to North America this spring, playing Chaos in Tejas in Austin and NYC Popfest where they'll headline at Public Assembly on June 1.The band are turning those festival appearances into a full tour. The dates include another NYC-area show at Maxwell's on June 3, a couple days after Popfest. Tickets for that are on sale now.

If you're unfamiliar, Robert Scott formed The Bats with guitarist Kay Woodward while he was still a member of The Clean, and the group have had the same four-member line-up since 1982. Likewise the band's sound -- Robert Scott's jangly strum, Woodward's snaky guitarlines, Paul Kean's melodic bass and rock-solid drummer Malcolm Grant -- has remained the same over the course of eight albums and countless EPs and singles. Along with The Clean, The Verlaines and The Chills, The Bats were the sound of '80s Flying Nun. I'm partial to the band's first three albums -- 1987's Daddy's Highway, 1990's The Law of Things and 1992's Fear of God -- but their whole catalog is worth checking out.

A few Spotify streams and videos, plus all Bats tour dates, are listed below.

The Bats - Block of Wood

The Bats - Too Much