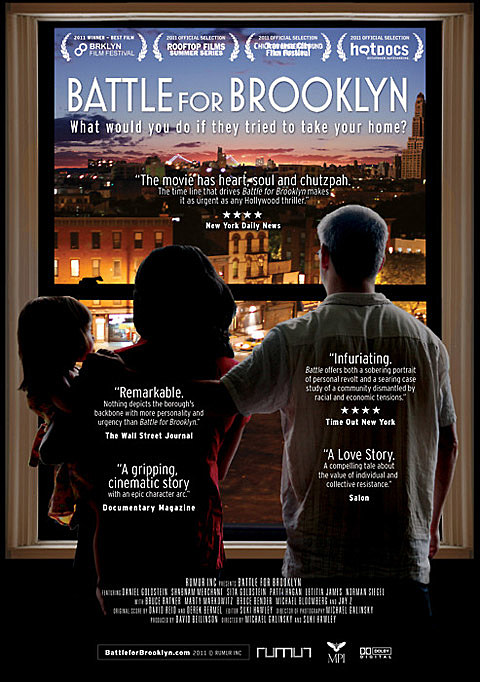 While the opening of Barclays Center was a happy moment for some, for others... not so much. In fact, the trials and tribulations of one man who fought the development is the subject of a film:

BATTLE FOR BROOKLYN follows the story of reluctant activist Daniel Goldstein as he struggles to save his home and community from being demolished to make way for a professional basketball arena and the densest real estate development in U.S. history. Along the way, he falls in love, gets married and starts a family while living in a vacated building located at the heart of the project site. Over the course of seven years, Daniel spearheads the movement against the development plan as he and the community fight tenaciously in the courts, the streets, and the media to stop the abuse of eminent domain and reveal the corruption at the heart of the plan.

Upcoming screenings of the film in the NYC area include 9/25 at Indiescreen (Kent/S 2nd in Williamsburg, Brooklyn, tickets), 9/26 at the Brooklyn Society for Ethical Culture (53 Prospect Park West), 9/27 at Maysles Cinema with a Q&A from director Michael Galinsky (343 Lenox Ave in Harlem, tickets), and last but surely not least, a free screening on 9/28 at Dean Street Playground Ball Field (Dean between 6th & Carlton Aves) which is "steps" from the arena and takes place on the opening night of Barclays Center during the concert by director Jay-Z. In fact, it will be an eventful day for protesters all around:

FRIDAY, SEPTEMBER 28 (arena opening day)
11AM: Press conference @ Barclays Center, in front of the Pacific Bears Community Garden, opposite the arena, at triangle tip where Flatbush and Pacific meet (details to follow).

12PM - 4PM: Popup actions all around the Barclays Center

Head below for a full list of screenings and the film's trailer.