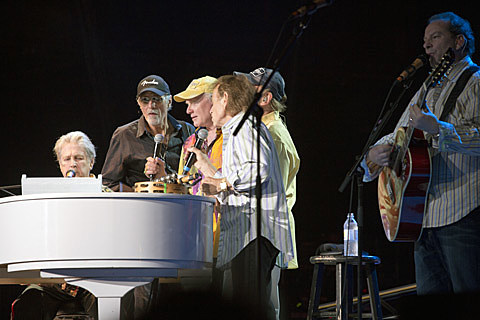 The Beach Boys brought their 50th anniversary tour, which sees the band reunited with Brian WIlson for the first tour in a long time, to NJ last night (6/27) for a show at PNC Bank Arts Center. Like they've been doing on the rest of the tour, they played a 40+ song show split into two sets, with the first set focusing most heavily on their earlier material, and the second set bringing in the gems from the late '60s/early '70s period. Over the years, Beach Boys harmonies have become a root of most multi-voiced indie rock bands, but even in 2012, 50 years into the band's career, no one is doing it quite like them. The falsettos rang beautifully (even if it wasn't Brian singing them) as their pitch perfect harmonies soared over every song, from their earliest hits to the tracks off their new record, That's Why God Made the Radio. The instrumentation was lush too, but how could it not be with two (sometimes three) percussionists, four keyboardists, and five guitar players?

The crowd mainly stayed seated, but picked their favorite moments of the set to stand and dance for particular songs. In the first set, all rose for the Phil Spector-penned "Then I Kissed Her" and "Be True To Your School," during the latter of which various college logos were shown on the stage's screen, gaining an extra amount of applause from the crowd when the Rutgers logo popped up (we were in Jersey). Before ending the first set, Mike Love said, "It wouldn't be apropos to take our intermission without firing up the hot rods one more time," before the band kicked off a medley of car songs with "Little Deuce Coupe," "409," "Shut Down," and finally, "I Get Around."

When the band returned for their much-anticipated second set, only guitarist David Marks (who briefly played with the band from 1962-63 and is now back in it for the reunion) and the members of the backing band came out, opening with the instrumental title track to 1966's great Pet Sounds. Brian takes a bit of a back seat during the first set, which is essentially a crowd pleasing hits collection most similar to the one played by Mike Love's version of the band (who Mike is already planning to tour with...without Brian). But as immediately proved after the remaining members of the Beach Boys took the stage for set #2, this was Brian's half.

Though he was rarely actually playing the piano which he set behind for the majority of the set, and his falsettos were handled by members of the backing band, when he did sing, Brian really took control. The band followed "Pet Sounds" with Sunflower's "Add Some Music to Your Day," which saw Mike Love, Al Jardine, Bruce Johnston, and David Marks huddled around Brian's piano as they complemented him in carrying the song's lead vocal.

Things only got heavier from there. They nailed the infinitely-expanding "Heroes and Villains" off the legendary Smile album (though without the "Our Prayer" intro which they did at Jones Beach 3 days earlier) with Brian on lead. Then came a string of Pet Sounds cuts -- "Sloop John B," "Wouldn't It Be Nice," and "I Just Wasn't Made For These Times." The first two had the crowd singing and dancing, but it was on "I Just Wasn't Made For These Times" that Brian delivered his strongest vocal performance of the night. They followed with two more Brian-lead songs, "Sail On, Sailor", which though sung by Blondie Chaplin on 1973's Holland LP, is actually a cut taken from Brian's writing sessions with Smile collaborator Van Dyke Parks, and "In My Room," one of Brian's earliest examples of the personal songwriting that would come to inhabit Pet Sounds.

The band are unfortunately without Dennis and Carl Wilson, both of whom passed away years ago, but their contributions were not forgotten. Dennis was honored with a performance of "Forever," which Dennis wrote for the Sunflower album. Video of Dennis singing surfaced on screen as his recorded voice lingered over the band during their performance of the song. The same haunting treatment was given to Carl for "God Only Knows," a song written by Brian but given to Carl to sing on the album. This was immediately followed by the only other Smile song of the night, the towering "Good Vibrations," lead by another great vocal performance from Brian.

It was overall a great show, and great to see Brian back in the band, but my only complaint is that now that he is finally back, I'd like to see them doing more of the songs that can't be done without him. It's fun to hear the earlier, Mike Love-fronted numbers like "Fun, Fun, Fun" and "Surfin' USA," but much of it could have been replaced with more from Smile or some of Brian's more personal Pet Sounds cuts like "Caroline, No." Especially now that The Smile Sessions finally saw a release within the same year as the band's reunion, and that Darian Sahanaja (a member of The Wondermints, Brian's touring band, and one of the biggest forces behind Brian releasing his 2004 version of Smile) is playing with the band on tour, it seems totally appropriate to be including those songs.

You can check out pictures from Sunday's Jones Beach show (6/24) here. Meanwhile, the Beach Boys reunion tour rolls on. All remaining dates dates are below.