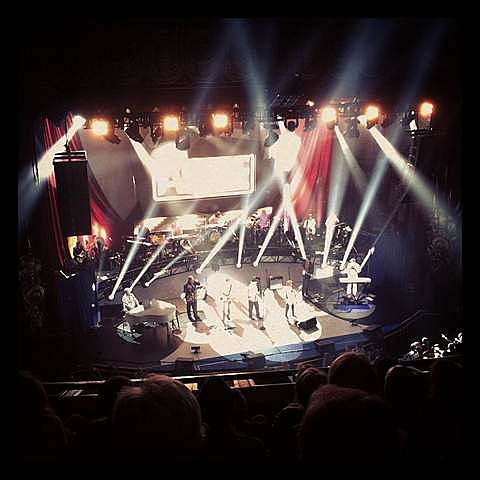 The Beach Boys, who played Fallon on Monday (5/7), played their first of two Beacon Theater shows last night (5/8) on their 50th Anniversary tour, the first full tour with Brian Wilson on board for a very long time. The set appropriately kicked off with "Do It Again," off 1969's 20/20, before going into a set of their early '60s material including "Surfer Girl," "Don't Back Down," "Wendy," "I Get Around," and a few others.

After a short break, the band returned for a second set which kicked off with a cover of The Mamas & the Papas' "California Dreamin'" and went on to include a handful of cuts from Pet Sounds and others from their late '60s/early '70s period. John Stamos, who sat in on drums for part of the first set (some, like the NYTimes, may say that he overstayed his welcome), sang lead vocals on the Dennis Wilson-written/sung classic "Forever," off 1970's Sunflower. In addition to Pet Sounds cuts like "Wouldn't It Be Nice," "God Only Knows," and "I Just Wasn't Made for These Times," the band played Smiley Smile opener "Heroes and Villains," Holland opener "Sail on, Sailor" and a few more earlier ones like the classic Summer Days singles, "California Girls" and "Help Me, Rhonda," and one of Brian's earliest foreshadowing moments of the personal material he would eventually become known and loved for, "In My Room." The band returned for an encore, which included "Kokomo," "Good Vibrations," and "Fun, Fun, Fun." Some videos and setlist from the show below.

One of the tracks in the Beach Boys' second set was their new single, "That's why God Made the Radio," off the upcoming album of the same name. Its echoing drums and big sax lines make the track reminiscent of something off Holland, with carefree lyrics that bring to mind the band's earlier material. Check out the lyric video for the song below.

The Beach Boys "Do It Again" at Beacon Theater tonight (5/9) and have other upcoming NYC-area shows at Westchester County Center on 5/15, Jones Beach on 6/24, and PNC Banks Arts Center on 6/27.

Video and setlist from last night's show below...

The Beach Boys - "That's Why God Made the Radio"

Beach Boys - Beacon Theater 5/8/12 Setlist: (via)
First Set
Do It Again
Catch a Wave
Hawaii
Don't Back Down
Surfin' Safari
Surfer Girl
Please Let Me Wonder
You're So Good to Me
Wendy
Then I Kissed Her
The Little Girl I Once Knew
Why Do Fools Fall in Love (Frankie Lymon & The Teenagers cover)
When I Grow Up (to Be a Man)
Cotton Fields (Lead Belly cover)
Disney Girls
Don't Worry Baby
Little Honda
Be True to Your School
Little Deuce Coupe
409
Shut Down
I Get Around

Second Set
California Dreamin' (The Mamas & the Papas cover)
Sloop John B
Wouldn't It Be Nice
Forever
Sail on, Sailor
Heroes and Villains
In My Room
All This Is That
This Whole World
I Just Wasn't Made for These Times
God Only Knows
That's Why God Made the Radio
California Girls
All Summer Long
Help Me, Rhonda
Rock and Roll Music (Chuck Berry cover)
Do You Wanna Dance? (Bobby Freeman cover)
Barbara Ann (The Regents cover)
Surfin' USA