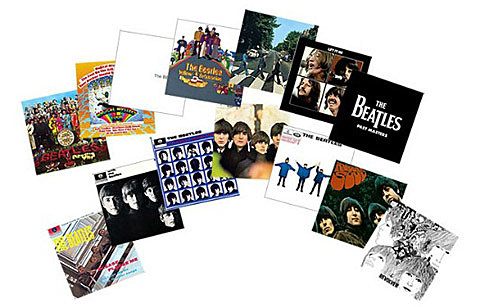 Twenty-two pounds. Six Inches. $449 retail. The Beatles are releasing their fourteen original studio albums plus rarities into a single massive sixteen LP box set containing a 252 page booklet. Each album will also be sold individually as well. The release(s) have been newly remastered and are available now ("now $349"), for all of you who don't have copies of the records, possibly purchased from your local used record store.

Rumor has it that this massive sixteen LP and reported 50,000 copy box set has had another, unseen price though too... a delay in the pressing in many other records. Due to the limited and shrinking number of vinyl pressing plants in the US, many other labels have had delayed returns on their own pressings. It's too early to tell if this will have a serious negative impact on some companies (and record collectors), though the renewed interest in Beatles vinyl could also be good for the already-growing vinyl business as a whole.

Let us know if you've had an order delayed "due to Beatles".