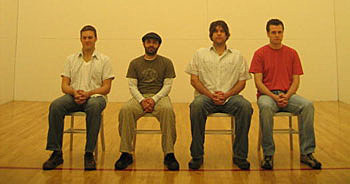 Martha Wainwright, Chris Thile (from Nickel Creek), Jim Campilongo, Ari Hest and The Bees come together for this unique concert of alums from The Living Room’s venerable stage. As one of NYC’s musical landmarks, the club has become a venue for the best and brightest singer/songwriters.

You've got a Wainwright, a member of Nickel Creek, a popular guitarist who is in the band The Little Willies with Norah Jones, that Ari Hest guy, and.....The Bees. The Bees (from Nashville. - not the U.K.) are pretty new to me - "pretty" new because actually one of my friends has been urging me to go see them with him for the past few weeks - if not tonight (June 26) at the free "Living Room show", then at the actual Living Room tomorrow (their only two tour dates).

Don't confuse them with the UK band with the same name who played Glastonbury this weekend, or with the actual insects, or with one of the many other bands with "bee" in their name. Their latest album "High Society" is like a soft rock (in a good way) record out of the 70's that is so pleasant, it's kind of impossible not to like. They've been compared to James Taylor, Jackson Browne, The Eagles, The Beach Boys, and Van Morrison. One of the highlights on "the album is the song "Imaginary Girl" - Music For Robots agrees. Listen at MySpace.