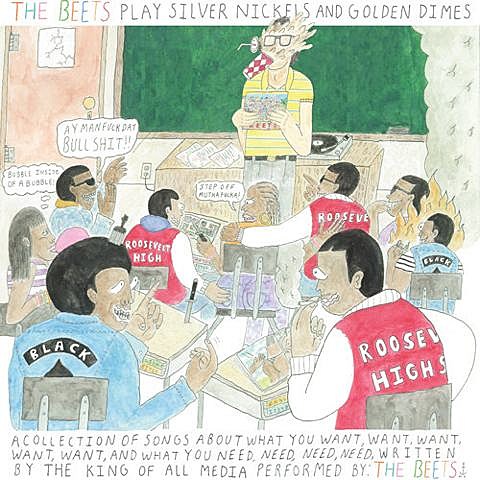 As you may know, Jackson Heights band The Beets are unabashed fans of Howard Stern and have actually appeared on the show. Howard told the band they reminded him of "his old 6th grade psychedelic band" (which he's played on his show a few times) and encouraged them to cover his songs. The Beets have done just that on a new 7" that features two Stern songs "Silver Nickels and Golden Dimes" and "Psychedelic Bee." That's the cover art above (as always by Matthew Volz) and you can stream "Silver Nickels" below. You can buy the single October 15 via Hardly Art.

The Beets have an upcoming tour on the East Coast to and from Hopscotch Festival. Upcoming NYC shows including Shea Stadium on September 21 and then opening for Parquet Courts at Music Hall of Williamsburg on October 3 (tickets).

All tour dates are listed, along with the song stream (and snippets of Howard Stern's original version of "Psychedelic Bee"), below.