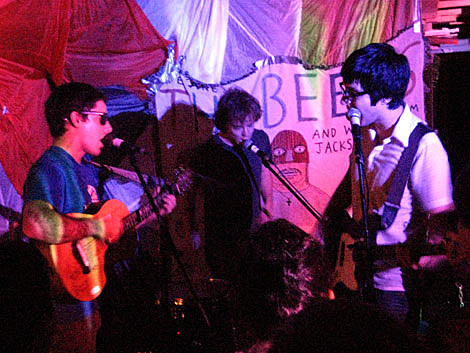 As you may have heard, L Magazine put out their annual "8 NYC Bands You Must Hear" issue this week. Tonight (5/1), three of the eight are playing live... and two of them are playing the same show. Those two would be pow wow! and The Beets who play at the Red Star bar in Greenpoint and I heartily give the thumbs up to both of them. I caught the latter last Friday when they played with Box Elders at Bruar Falls and thought they were great, maybe even just a smidge better than the Box Elders. In a weird way, The Beets kind of remind me of a more simplified version of '60s frat rock (The Troggs, Swingin' Medallions) by way of New Zealand. Though live their songs don't so much end as stop, somehow it all works. Their vinyl-only album, Spit in the Face of People Who Don't Want to Be Cool (a nod to WWE's Carlito), is well worth seeking out. They've got a new EP on Captured Tracks coming out sooner than later too, so be on the lookout for that too. An MP3 is at the top of this post.

I've written about pow wow! previously and have seen them a couple times now and they are a lot of fun, and have the kind of party vibe about them that would make them perfect for a residency at Ruby's Bar in Coney Island. If such things existed. At both shows I saw, pow wow! had the crowd dancing. Also on the bill are The Wild Yaks and The Subjects. Entry's only $4 and there's free Colt-45 from 9-10. Flyer below.

The other L Magazine trumpeted band playing tonight are Darlings who'll be at the 92Y Tribeca. I'm not so familiar with them, but here's what the L said:

They call to mind a sloppier Teenage Fanclub or Sloan at times, with whimsical melodies that feel completely timeless. Then, out of nowhere, they turn into a loud, screamy rock band, like early Replacements or the Jason Lowenstein contributions to Sebadoh, or maybe even... Nirvana? Basically, they've held onto the idea that this whole music thing was always supposed to be fun because you get to bang on shit really, really hard -- it just so happens they bring an awful lot of other stuff to the table as well.

Comparing a band to Teenage Fanclub and Sloan is a quick way to get me to listen. Darlings play with Snakes Say Hiss, and Boogie Boarder. They also play May 7 at Glasslands with pow wow! and the Sundelles.

Speaking of, The Sundelles also play tonight (5/1) at Matchless with The Browns who made the L Magazine's "Honorable Mentions" list:. Both bands are on 1928 Recordings which is also home to The Soft Pack and sound not dissimilar to that band. (Actually, Browns frontman Ryan McReynolds owns 1928 Recordings so maybe it all makes sense.) And like The Soft Pack, The Browns do that uninterested-but-sneering-with-contempt attitudede thing particularly well. The Sundelles are a little happier and a little more low-fi, but also quite good. MP3s for both Browns and Sundelles are at the top of this post.

My other recommended Friday show would be The Dears. 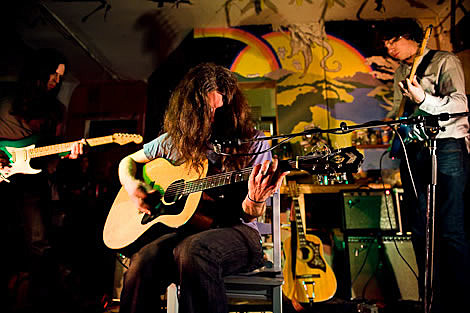 Moving on to Saturday, there's a potentially good show at Silent Barn (not my favorite Todd P venue i must admit) featuring Kurt Vile and Gary War who have played together there before. They both share a love of putting out a zillion releases in every format and as many labels as possible. Philadelphia's Kurt Vile is a good musician -- don't let his low-fi aesthetic fool you -- and his Woodist album, Constant Hitmaker, is very good. (His EP on Mexican Summer is less interesting to these ears.) Gary War is a bit weirder, more psychedelic and, like Blank Dogs, he likes to run his vocals through weird, watery effects. And also like Blank Dogs, he gives away his music on his blog, including the whole of his new album, New Ratheonport, which features "Bounce Four," which you can download at the top of this post, and a way-trippy cover of Alan Parsons Project's '70s soft rock classic, "Eye in the Sky." Two bands separate Kurt and Gary on the bill: Sightings and Drunkdriver. 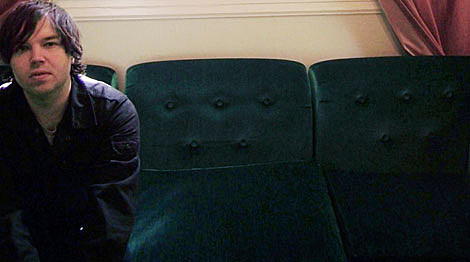 And last but not least this week, we've mentioned before that Vetiver are in town for two shows: Sunday (5/3) at Bowery Ballroom and Thursday (5/7) at The Bell House. As much as I like the headliners -- and I do -- I'm more excited about openers Papercuts, who've made one of my favorite records of the year so far, You Can Have What You Want, which came out two weeks ago. The nom-de-rock of San Francisco resident Jason Quever, his second album is dense, layered, melodic and sounds like a warm Sunday morning, not unlike Cass McCombs. I liked Papercuts' 2007 debut, Can't Go Back, but this new one is just miles better. I have yet to see Papercuts the band (Quever augmented with a few friends) play live, and I know previous NYC stops have gotten mixed reviews, but I can't wait to see what they're like.

Videos and tour dates are below... 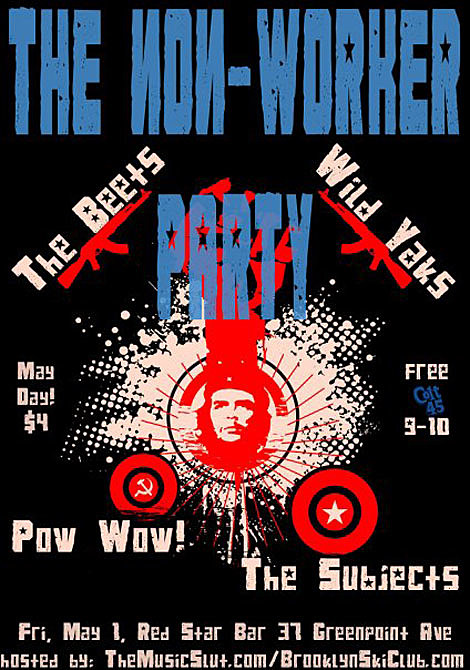