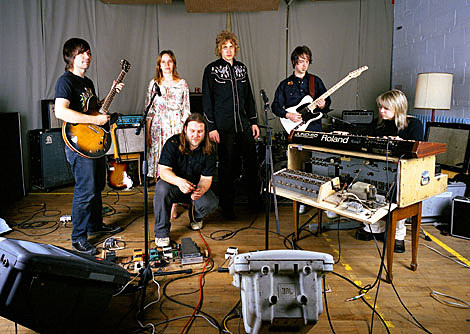 The film is, according to a Variety from last year, is about a paralyzed DJ (real-life paraplegic actor Christopher Thornton) struggling to survive in his wheelchair on the streets of L.A. He turns to faith-healing and mysteriously acquires the ability to cure the sick -- although not himself. Ruffalo plays a Jesuit priest who tries to help him come to terms with the limits of his gift, and [Orlando Bloom] a rock singer in a band that exploits the suddenly famous healer." James Franco was originally set to play the rocker, but evidently either his education at NYU or another project got in the way and Bloom replaced him...

..A music licensing pal in Montreal tell us that while two or three licensed other tracks will appear in the film (bands not confirmed as of yet), the the rest of the music will be an original score by the Besnard Lakes (though the music will be specifically written by the two founding members). Ruffalo turned out to be a fan and the music supes put the music into the right hands. The rest is history. [The Playlist]

It's been a while since we've heard from Canada's The Besnard Lakes. The last time the group played NYC was on their 2007 tour with Peter Bjorn & John (though PB & J weren't on the bill for that particular gig). They return on October 3rd 2009 for a show at Mercury Lounge. They also play a show at TT the Bear's in Cambridge one day earlier. No ticket info yet. More dates may be announced.

A video refresher on the Besnard Lakes below...

besnard lakes - and you lied to me