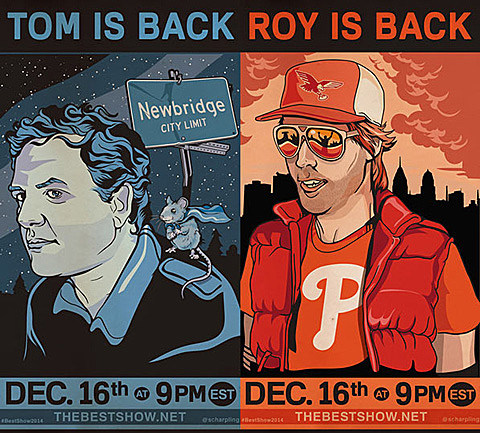 As mentioned, Tom Scharpling's The Best Show is coming back as an online live podcast. It will return in its familiar timeslot (Tuesdays from 9PM - Midnight, EST) and this Tuesday (12/16) will be the first show. You can tune in via TheBestShow.net.

You may have heard The Best Show do a trial run on Saturday afternoon (12/13) where Tom and engineer Mike played some tunes, took some calls and generally worked out some kinks. Scharpling kept saying "we'll see you April" but obviously that was a joke. The Best of The Best Show box set, featuring the funniest bits from their WFMU years, will be out in March via the Numero Group.

In other news, The Goddamn Dave Hill Show moved from The Best Show's old Tuesday slot to Mondays from 9PM - midnight on WFMU, so no conflict on which to listen to is now.