artwork for 'THE BEST OF THE BEST SHOW' 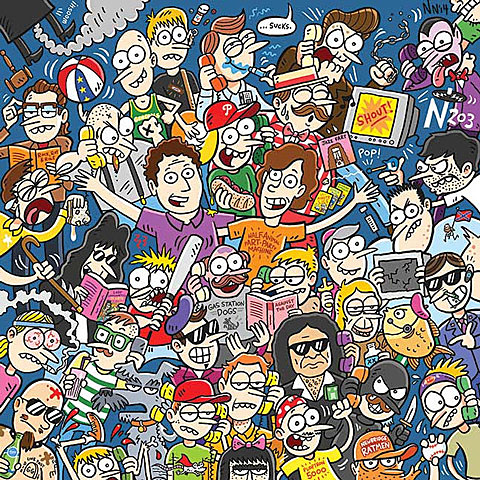 There's a lot of news in the world of Tom Scharpling. Firstly, he announced the return of much-loved, much missed The Best Show, which ran for 13 years on WFMU until going off the air in December 2013. (Dave Hill took over his time slot.) Where is still unknown but its return starts in November with comedy co-conspirator Jon Wurster and engineer AP Mike. Scharping did just announce that the show had a new email address: BestShow2014@yahoo.com. Could this be a clue as to where The Best Show will call home?

In other news, some of Scharpling & Wurster's best Best Show bits are being compiled on a massive, 16-CD box set, which is being released by the Numero Group (!) in March. Here are all the details:

75 calls over 16 compact discs, edited by Scharpling & Wurster (over 50 of them previously unreleased or unaired), a 108-page hardcover book with cover art by Joe Matt that features essays by Patton Oswalt, Julie Klausner, Damian Abraham (lead singer of F*cked Up) and Best Show associate producer Michael Lisk (aka A.P. Mike), a definitive interview with Scharpling & Wurster by Jake Fogelnest, notes on the evolution and inspiration behind each bit written by Scharpling & Wurster, a USB drive with all of the calls plus 4 hours of bonus material, a fold-out map of Newbridge, Philly Boy Roy & Timmy von Trimble Paper Dolls, postcards, and temporary tattoos with The Best Show catch-phrases.

Also, pre-orders come with a piece of the phone Wurster used to make his first call to The Best Show ("Rock, Rot & Rule") and was smashed to bits by Wurster and Scharpling, as can be seen in a video below. When announced, demand was so high it crashed Numero Group's website!

There's a third "secret project" that Scharpling will announce soon. Meanwhile, check out the Scharpling & Wurster box set video, and a special mix Tom made for The Best Show's 14th anniversary (not for folks who don't want to hear a sampled Chris Hardwick repeatedly shout "POINTS!"), below...