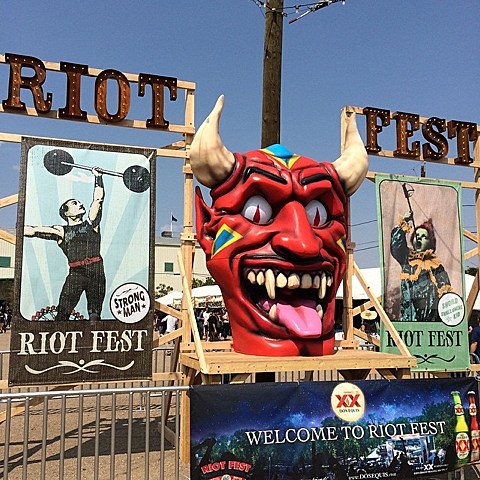 Riot Fest Denver kicked off yesterday (8/28) at its new location of the National Western Complex, which (as the mechanical bull and scent in the air reminded you) is usually home to rodeo shows. It's across five stages, one of which is indoors, and also offers carnival rides, Colorado-specific treats like Chronic Candy (though I was told that's only hemp) and more. Like most festivals, it had newer, buzzy bands who played great sets like Speedy Ortiz, Cayetana and The Hotelier, but for me at least, the real highlights were the masses of classic artists we got to see. (Unfortunately one of those, Motorhead, had to drop off at the last minute due to Lemmy's breathing issues. He cut a show short a day earlier in Salt Lake City for the same reason.)

There was a lot to love about Riot Fest Denver day 1, but here's five highlights:

THE GET UP KIDS: It's The Get Up Kids' 20th anniversary, and they don't seem shy about the fact that everyone's favorite songs were written in the '90s because that was mostly what we got. "Holiday," "Action and Action," "Valentine," "Red Letter Day," "Ten Minutes," "Don't Hate Me" and more were played from their classic period and it was a singalong the whole time. The Get Up Kids may have taken an extended period off from being a band, but you'd never know it at this point. They're super tight, they look like they're having a ball on stage, and the crowd is eager to have as much fun as the band is. Their Riot Fest set got off to a rocky start due to sound issues, but it quickly became one of the best sets I saw all day.

TESTAMENT: Of everything I saw, the band who truly got the daytime crowd going wild was '80s-era thrash legends Testament. The pit was going so hard that if you were anywhere near the front you were getting dust in your eyes, and the band delivered expertly. Every extended scream, every guitar solo -- they were flawless. Testament were always smiling, always engaging the crowd, but never at the expense of delivering intense music. People talk a lot about the decreasing interest for rock on major festivals, but between Testament and Anthrax (who took the same stage right after them), fests may just need more classic metal bands.

IGGY POP: Is there anyone as ageless as Iggy Pop? With classic albums dating back to the '60s, he's one of the few people you could safely credit with inventing punk rock, and he hasn't lost that spirit one bit. He runs around stage like he's half his actual age, and genuinely seems like he's giving us every ounce of energy in his body. We got so many favorites -- "No Fun," "I Wanna Be Your Dog," "The Passenger," "Lust For Life," "1969" -- and they all sounded exactly like you'd hope they would. The fact that we get to experience Iggy in full force all these decades later is truly an amazing thing.

ICE CUBE: It's pretty safe to say it's the year of NWA. There's a hit biopic in theaters, the soundtrack to which is Dr. Dre's first album since the '90s, and talk of the groundbreaking rap group is just in the air. So it was perfect timing for Ice Cube to reunite with his old groupmates MC Ren and DJ Yella (like he did at the BET Experience in June) for "Straight Outta Compton," "Fuck Tha Police," "Dopeman" and more classic jams. Sadly (like at the BET Experience) Dr. Dre did not come out, and neither did their pal Snoop Dogg (who did join the group at the BET Experience and plays Riot Fest on Sunday), but it was still a surreal experience to see those three on stage together. And they sounded as fanastic as you'd want. The partial NWA reunion was the real draw, but even when Ice Cube dove into his solo career ("Check Yo Self," "Natural Born Killaz," etc) he made it feel like the G-Funk era was alive and well.

SYSTEM OF A DOWN: Look, when System of a Down were added to Riot Fest, I thought people were going to think it was lame. I mean this is a festival that sold tickets because people wanted to see Iggy Pop, Pixies, The Damned, American Nightmare, Swervedriver and 7 Seconds. These people don't like System of a Down. But not only was I wrong, they had the biggest and wildest crowd of the day. It makes sense that of all the bands to come out of early 2000s nu-metal, System of a Down would work so well at what's largely a punk festival. Most of that stuff was deservedly laughed at by cynics, but SOAD were different. They were weird, and they were way closer to a hardcore band than a pop band. If Refused never broke up, those two might've toured together. And that came across in full force on Friday night. Thousands of people were raging to this band who were playing the weirdest songs that anyone played all day. It was a strange, awesome experience.

Just a guy in a wheelchair crowd surfing to #testament. Welcome to #RiotFest #Denver