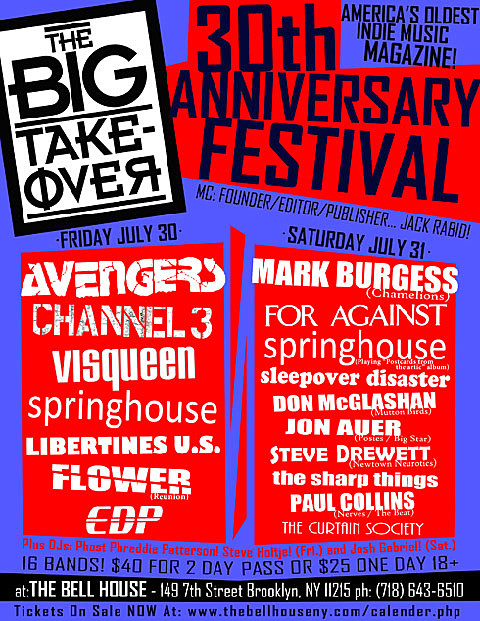 This weekend is The Big Takeover's 30th Anniversary celebration: two nights of shows at the Bell House put together by Jack Rabid who has been publishing the 'zine since 1980. Jack's one of the most passionate, informed music fans I've ever met and he's put together a pretty stellar line-up of artists, most of which will be familiar to regular BT readers.

Friday night (7/30) is headlined by San Francisco punk legends The Avengers, and Seattle's Visqueen, and the first performance in 16 years by Flower (Ed and James Balyut's pre-Versus band). Plus the L.A. punks Channel 3, the Libertines U.S. (from Cincinnati) playing their first-ever Big Apple show, and Jack Rabid's band Springhouse. 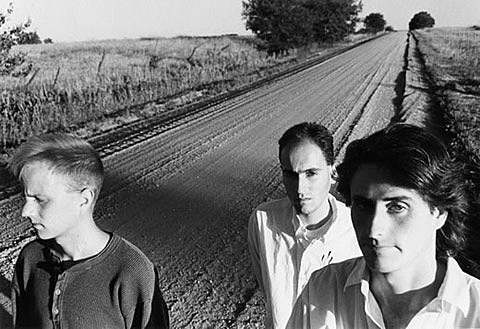 You can still buy two-day passes for $40 as well. (Individual tickets are $25.) If you've never read The Big Takeover, well you should really recitify that. Each phone book sized issue (twice yearly) is packed with in-depth interviews, reviews and essays, the bulk of which is still written by Jack. The magazine's slogan is "Music with Heart" and he means it, man. The 30th Anniversary issue (#66 if you're keeping track) is just out with Spoon on the cover. Like always, it's a great read. 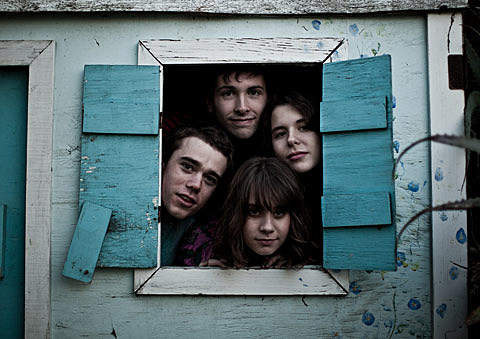 Avi Buffalo play the Seaport Music Festival on Friday, their only New York appearance this go-around. Their self-titled Sub Pop debut is an impressive collection of shimmery, folky guitar pop that has stayed in constant rotation on my stereo since March. Live, Avi Buffalo put a little more muscle into the tunes. Front man Avigdor Zahner-Isenberg is a Doug Martsch in the making. (You get a sense of it on the LP's seven-minute jam "Remember the Last Time.") Dude uses like 15 pedals and is a pretty serious shredder. I thought they were great at South by Southwest. Yes they are barely old enough to buy cigarettes (not that they should be smoking!) but that just means Avi Buffalo haven't even hit their stride -- which is exciting.

Opening is Canadian multi-hyphenate wunderkind (and Sub Pop labelmate) Chad Van Gaalen who hasn't made a new record of his own in two years but has probably stayed busy being an illustrator, animator, and producer of Women. Unlike last Friday, weather looks to be idyllic Friday (sunny, high of 84) -- should be a lovely early evening on the pier. 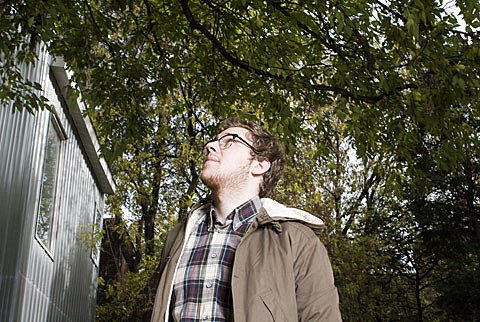 Despite the preponderance of reverbed garage, twee indiepop and '90s era slackerdom in this column, I do listen to a fair amount of dance music though I'm not really a club-goer. One of my favorite albums of 2009 was Continent, the full-length debut from CFCF, aka Vancouver beat-maker Michael Silver. It's an ambitious disc of instrumental, yet highly melodic dance music without even a trace of chillwave. (Though there's definitely some Balearic in there.) It's ridiculously catchy, and you may find yourself singing overtop tracks, making up your own lyrics (Well I do anyway.) Annie, Roisin, Robyn, etc... may I present your new collaborator?

You can download CFCF's great cover of Fleetwood Mac's "Big Love" at the top of this post -- the only vocal track on Continent. Silver, who is also an in-demand remixer (on the new HEALTH album for instance), is in town this weekend for a bunch of DJ gigs. You can hear him spin Friday night (7/30) at Cameo Gallery with Jacques Renault and Lovefingers, and then the PS1 Warm Up on Saturday (8/31), where Animal Collective also DJ, plus live performances from Prince Rama and Blondes. 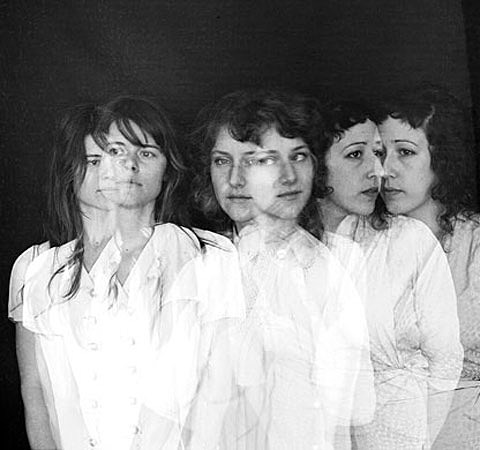 If you're going to Prospect Park for Sonic Youth on Saturday, do get there early and catch Grass Widow as it's their only NYC show for now. The San Francisco trio's new album, Past Time, is out August 24 on Kill Rock Stars. It could use a few more choruses but gets by on the band's very distinctive sound. You can download "Shadows" from the new album at the top of this post and watch its lovely animated video at the bottom of this post. Grass Widow are teriffic live -- it will be interesting to see them on such a big stage. If you can't make it, they'll be back in September for two shows (Sept. 27 -28, venues still TBD). All tour dates at the bottom of this post.

And some daily picks of things not otherwise covered above:

The Music Slut has been blogging away for five years and they're celebrating on a boat! Specifically, the Rocks Off Concert Cruise ship and they've put Javelin, Keepaway and I Love Monsters aboard it. Boat leaves at 7pm, don't be late. Happy birthday, guys.

Coco 66 has a night of bliss-out drone, noise, old synthesizers, psychedelic freakouts, and tribal chanting all in celebration of the release of Amen Dunes' new album, Murder Dull Mind, which is out on Sacred Bones. Also playing Gary War, recent Paw Tracks signees Prince Rama (who are at PS 1 Saturday), and Coconuts. Open vodka bar at 9PM till it runs out.

Over at Silent Barn, you can catch locals Sisters whose debut album, Ghost Fits, is out in September on Narnack Records. Also playing: Knight School, Nude Beach, Giant Peach. 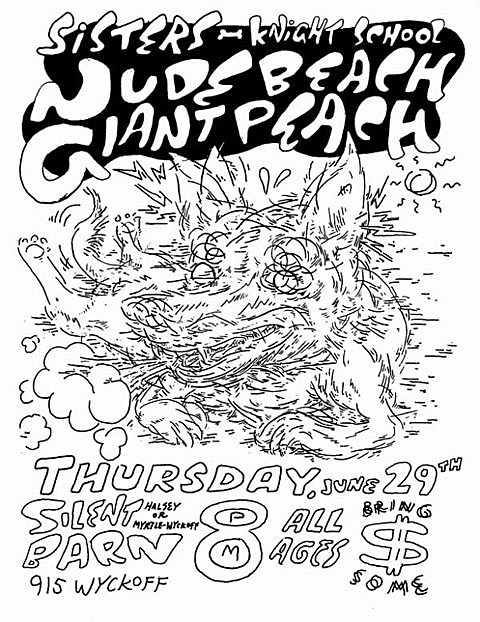 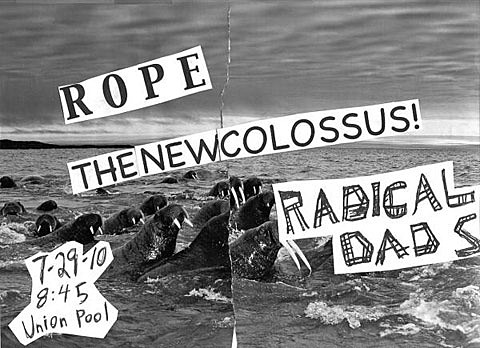 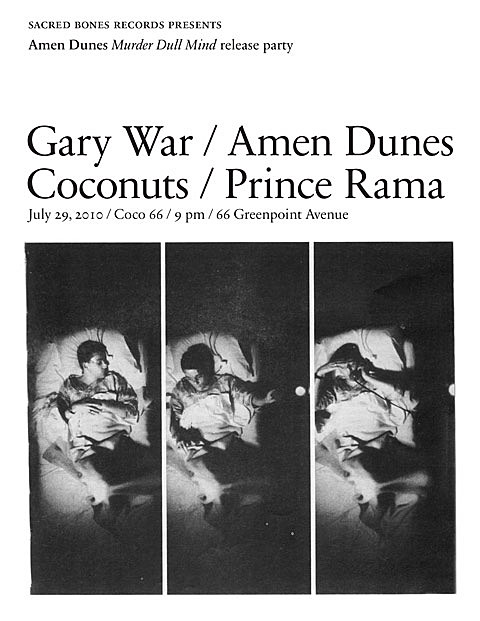 Ducktails are having a record release party at Glasslands for their new Live at WFMU 12" that also features the usual suspects: Julian Lynch, Campfires, Big Troubles, and La Big Vic. Hopefully Glasslands will have cooled off a bit...it was unbearable last weekend. 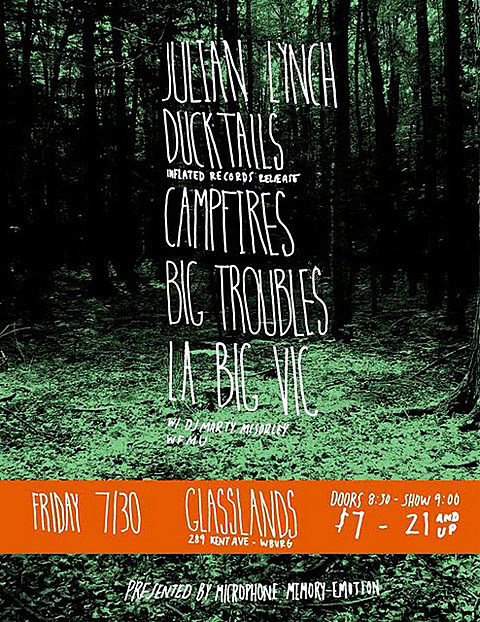 New-ish duo Year of the Tiger play Spike Hill. If you wish Sleigh Bells were more new wave and less chainsaw-on-chalkboard, you might want to check them out. It's free. 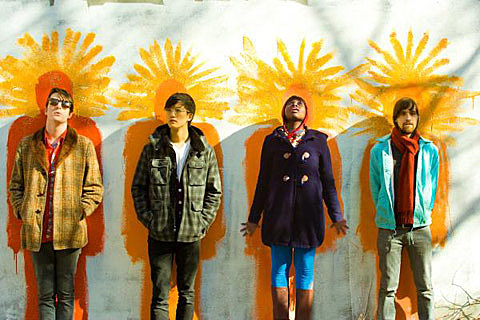 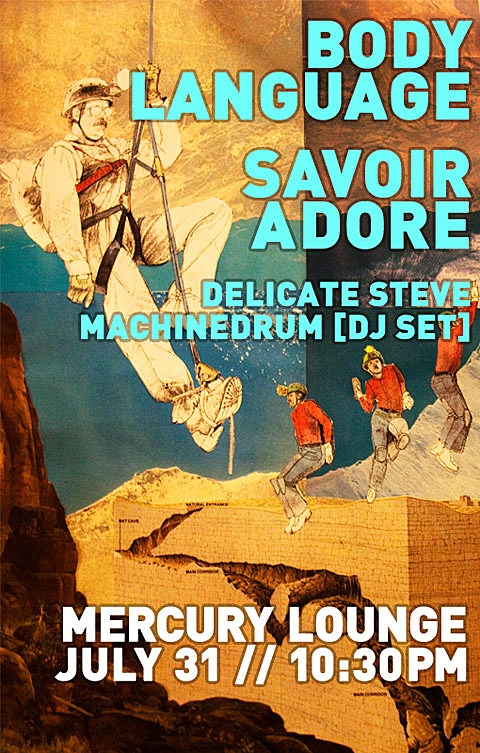 If you can get past how they look (I'm not sure whether it's worse if it's ironic or not), French duo The Penelopes have a few good tunes. They play the Rock Shop with gothy dance act Kordan.

OK, that's it for this one. More videos and tour dates below...

Avi Buffalo - What's In It For?