The Bird and the Bee @ Spiegeltent (more by Gabi Porter) 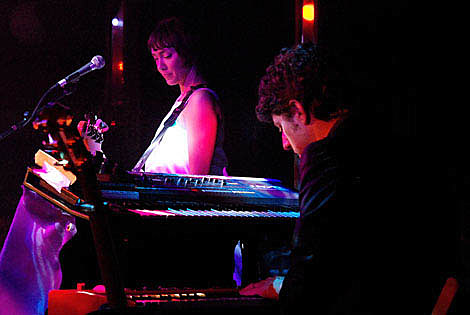 In 2009, Blue Note Records-one of the world's most legendary labels-will celebrate two milestones when it commemorates both the 70th anniversary of the label's founding by Alfred Lion, as well as the 25th anniversary of its re-launch in 1984 under current President Bruce Lundvall, with a global celebration. In events befitting a label known for offering The Finest In Jazz Since 1939, the coming year will feature the music, imagery and legend of Blue Note with a range of multi-media offerings, including live concerts, special digital and physical re-issues and new releases, The Blue Note 7; an all-star tribute band of current jazz luminaries, book releases, festival honors, merchandise and much more.

The Bird and the Bee's new album Ray Guns Are Not Just The Future will be released by Blue Note Records on January 27, 2009. You can hear a track from that at MySpace. Grab their non-album, new cover of Rihanna's "Don't Stop the Music" above. All dates below...