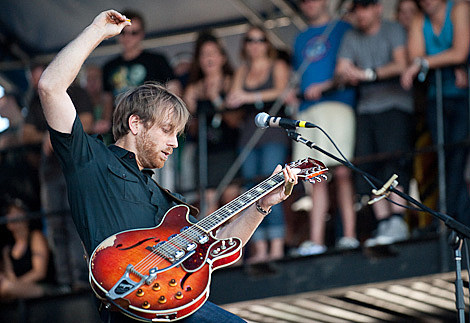 Auerbach and Carney squared off against Koenig by naming the commercials that had licensed their music -- Hewlett Packard, Zales, Victoria's Secret and Tommy Hilfilger, to name a few -- before Colbert called the contest a draw and declared that both bands had "equally whored out [their] music."

But that claim -- even if it was said in jest -- is somewhat misleading, Carney says.

"A lot of people see a Nissan ad and they see a finished product in a record store or on iTunes and that's the face of the band," Carney says. "What they don't see is that we made [Brothers] in a cinderblock building in the middle of nowhere in Alabama, with five microphones and a guitar amp and a drum set. I don't know what that means, exactly, but I do know we didn't spend a lot of money making this record, and it's an honest way of approaching making music. And once the music is out there, when you're selling a record and selling music and people are going to do whatever they want with it, it's kind of hard to resist certain opportunities, especially in the record market now." [NPR]

The Black Keys are currently up for four Grammy Awards... and for two MTVu Woodie Awards (more than any other artist).

The Woodies, for what it's worth, are going to take place at SXSW this year instead of in NYC as usual. Other nominees include Arcade Fire, LCD Soundsystem, Local Natives, Sleigh Bells, Two Door Cinema Club, Wavves, Das Racist, Die Antwoord, and Yelawolf. You can vote for the winners at MTV's site.