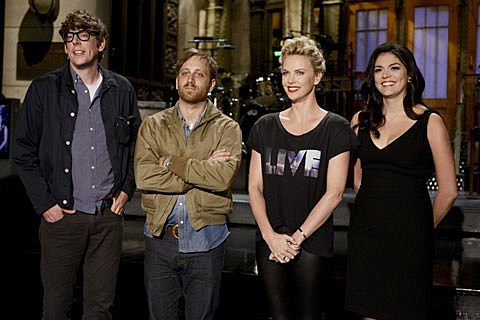 The Black Keys played two tracks off their upcoming album Turn Blue on SNL last night (5/10): "Fever" and "Bullet in the Brain". Watch both NBC performances below. and stay tuned for even more Black Keys TV this Monday:

Fans can watch The Black Keys' performance live and on-demand on CBS.com. Additionally, the webcast is available on-demand through CBS properties and the CBS App for iOS, Android, Windows 8 and BlackBerry.

Additionally, The Black Keys will perform two songs on the LATE SHOW with DAVID LETTERMAN, to be broadcast that same evening, Monday, May 12 (11:35 PM-12:37 AM, ET/PT) on the CBS Television Network.

The Black Keys return to NYC on 9/24 to headline the Barclays Center as part of a bigger tour (that also includes 3 TX shows and Glastonbury). Next weekend they play Hangout Fest.

The Black Keys perform "Bullet in the Brain" on SNL