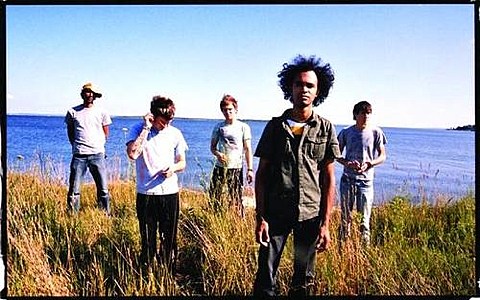 The lineup was just announced for 2014's FYF Fest. It's pretty killer, but amongst all those great names was one especially exciting one: The Blood Brothers. They broke up back in 2007, a year after the release of their last album, Young Machetes, and haven't played shows since, but as the band confirmed on their new Twitter account, they're back. So far FYF is their only announced date, but fingers crossed that they add more, and hopefully some on the East Coast too!

The Seattle band formed in 1997 and put out five full lengths during their initial run (in addition to a couple EPs and various other tracks), including the now-classic 2003 LP, ...Burn, Piano Island, Burn. They made some of the most boundary-pushing experimental post-hardcore of the '00s, led by the distinct dual vocals of Jordan Blilie and Johnny Whitney, who could switch from the harsh screams of '90s screamo to the high-pitched yelps of their contemporaries in The Mars Volta, to the lower, creepier vocals of '80s punk. All of that while the rest of the band would be spastic, dissonant, and relentlessly heavy.

Since breaking up, members have gone on to join or contribute to Fleet Foxes, Cold Cave, Telekinesis, Jaguar Love, Past Lives, and more.

Get excited for the reunion by reliving some classic Blood Brothers moments, below...

The Blood Brothers - "Kiss of the Octopus