The Blow at Pulse in Miami in December (crissachappell) 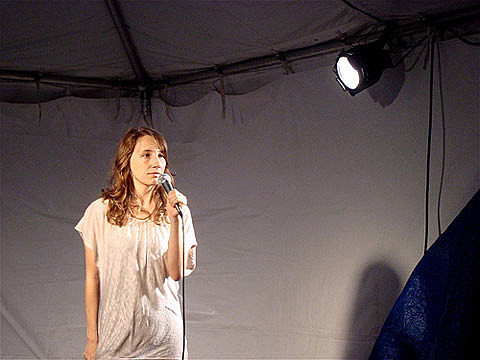 Khaela Maricich (The Blow) has performed sparsely over the past year. In that time, she moved to NYC, and has been preparing performance art/pop music, which she did a bit of at Art Basel in Miami on December 5th. At that performance she claimed to be writing songs with Lindsay Lohan and went on to perform some of them.

Other recent performances include opening a handful of dates for Vampire Weekend in March, where she apparently told the same story, because the new songs from that show (captured on video below) are labeled "Lindsay Lohan demo" by whoever put them on Youtube (one imagines a fumbling for the camera phone at the mention of a celebrity's name).

She's also made a few one-off appearances around town, like at Joe's Pub for Our Hit Parade Best of the Decade Show on December 16th (she performed Eminem's "Lose Yourself") and at the Bell House Haiti Benefit in January, where her set included an acoustic-guitar-backed version of her own "True Affection." Videos of both of those are below.

Her upcoming shows include a short tour of the Northeast this May, where she'll continue working out the new material. There is a new LP in the works, and she's set to release an EP later this year. At the shows, she'll be joined by installation and sound artist Melissa Dyne, who'll focus on "accoustics, light, and spatial phenomena" (they performed at Baltimore's Transmodern Festival just last weekend).

The short tour starts in Buffalo on May 4th and ends with a Brooklyn show at Glaslands on Thursday, May 13th. The Blow's full schedule and the above-mentioned videos are below...

The Blow - Up - Lindsay Lohan Demo