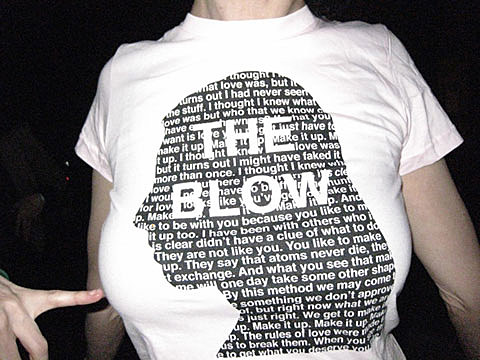 Khaela Maricich of The Blow walked on stage, bashfully said 'hello,' and started singing a new song A cappella. By the next song (crowd favorite "Hey Boy"), she began to warm up to the room - she broke out the dance moves and she began talking animatedly.

"This is The Blow's second show in New York since moving here," said the ex-Portland resident. She then launched into a series of intriguing claims with increasing enthusiasm. "So I got to write a song for a celebrity. Yeah I'm not bragging at all because the song's not going to come out [...] I can't tell you who it was, but you absolutely know who this person is. No question. But I very much doubt you ever listen to very much of her music." She proceeded to list off a number of descriptors that seemed to indicate that the mystery pop star was Lindsay Lohan, but in the end, she never quite spelled it out. Khaela played a number of new songs, many of which were allegedly from the unnamed celebrity's never-to-be-released album.

More than merely a singer-songwriter, Khaela is a performance artist and something of a comedian who makes it somewhat difficult to tell how much of her fantastical claims are true, and how much of the story is just a means to introduce material. Of course, her tongue-in-cheek matter of speech doesn't help matters. After talking at length about the unnamed celeb's power to transform society's view on lesbianism and establish new norms, Khaela suddenly said, "Unless I made that whole part up... you know when you can't tell?" Yeah, no kidding.

Seeing The Blow perform at Joe's Pub (a fancier venue with tables, candlelight, and fancy drinks) was a bit odd and almost disappointing. The seating precluded dancing - at least in the audience. Khaela herself was wildly entertaining on stage - both thanks to her theatrical stage banter and her spastic, fantastically awkward dance moves. For one song in particular ("Parentheses"), Khaela "turned up the feminine dial" and mimicked the unnamed celebrity who apparently liked to sing the song to her girlfriend. Khaela traded in her flats for a pair of dramatic gold high-heel sandals and tucked her sheer, over-sized shirt into a belt worn high on her waist to reveal some skin-tight black leggings. Within a matter of thirty seconds, she had transformed into an American Apparel model. 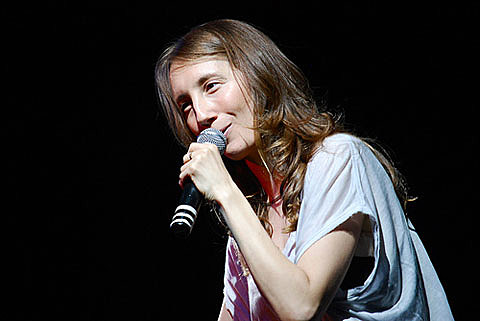 The Blow's set was short - she played for just under an hour and opted out of a formal encore, saying, "I think the encore thing is really embarrassing... you know with the curtain thing." She concluded with the creepy but infectious "Come on Petunia," a love song fit for a psychopath (look up the lyrics).

At the end of the night, the veracity of Khaela's celeb story was still in question, but true or not, it certainly made for quite an entertaining evening. The setlist, a video from an older appearance at the same venue, and some European tour dates, below...

The Blow @ Joe's Pub - July 9, 2010 - Set list (names of new songs unknown)
*new song (already standing on the ground)
Hey Boy
*new song (make it up)
Parentheses
The Long List of Girls
*new song (decompose)
*new song (a song to her girl friend)
*new song (a kiss was something to do)
Fists Up
True Affection
Come On Petunia