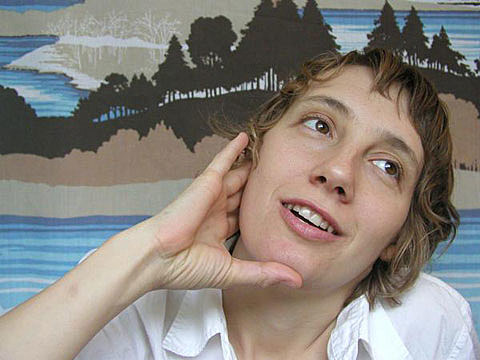 The only place to catch the Blow during CMJ (that I know about), and coming up in NYC at all at the moment, is at the BrooklynVegan showcase at Music Hall of Williamsburg on Thursday night (10/21). According to CMJ, who are correct, we'll be running on this schedule:

Tickets are still on sale for the Brooklyn show and we'll be letting in a whole bunch of CMJ badges. Also stay tuned to @bvCMJ where I'll be giving away at least one more pair of tickets.

Oh, and the first 50 people in the door Thursday night will get a set of free EarPeace ear plugs (a $14.95 value).

After CMJ, on November 9th, Khaela Maricich (aka the Blow) will hit the road with Blair who also has some CMJ shows of her own including a Wednesday show at The Rock Shop with Beach Fossils, Cloud Nothings, Braids, Lesands, and Tape Deck Mountain. And that Friday show at Mercury Lounge with Nada Surf and many others.

Blair will also take part in a Halloween show for kids, one of two upcoming Kidrockers events...

Experience the music at the heart of the CMJ Music Marathon as Kidrockers kicks off the fall season with Eternal Summers and Big Troubles on Sunday, October 24th at 1PM at The Living Room.

The following weekend, on Saturday, October 30th, Kidrockers is part of the NYC Parks and Hub TV Pumpkin Festival at The Central Park Bandshell with Chris Barron and Blair.

All Blair and The Blow dates below...