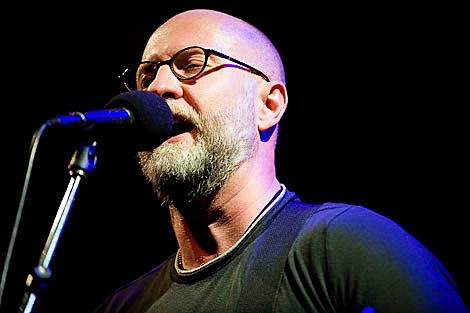 Bob Mould will head out on a full band North American tour this October. That includes a show at NYC's Irving Plaza on Thursday, October 8th. Tickets for that go on sale Wednesday, June 10th at noon. Sets on the tour will include material from "Husker Du to Sugar to Mould's latest Life And Times."

Bob Mould toured solo earlier this year (accompanied on some songs by a bassist/guitarist). The tour included a two-nights run at Joe's Pub. This time his band members will be Richard Morel on keyboard, Jon Wurster on drums, and Jason Narducy on bass.

Bob Mould brings his traveling Blowoff dance party to NYC's Highline Ballroom on June 26th and September 18th. Tickets for those DJ dates are on sale.

We speculated that Mould might be appearing as a guest vocalist with No Age at ATP NY, as the band will perform a Husker Du LP in full. The two have performed together before -- a video of No Age and Bob Mould performing "Miner" and "New Day Rising" in March 2009, with all tour dates, below...