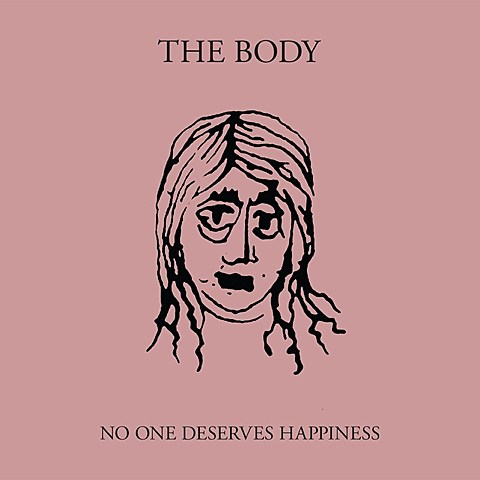 Portland via Providence blown-out noise doom duo The Body have been doing a ton of collaborations in the past few years, with the likes of Krieg, Full of Hell, and Thou, but now they've announced a new solo full-length for release in 2016. The official follow-up to 2014's I Shall Die Here (which actually was sort of a collaboration, with The Haxan Cloak) is called No One Deserves Happiness. It's out March 18 on Thrill Jockey, and it's being termed by the band "the grossest pop album of all time," They've released the first song, which is called "Shelter Is Illusory," and it's a definite curveball from a band that has thrown its fair share of them over the past few years.

Featuring vocals from Maralie Armstrong of Humanbeast, the pop descriptor is weirdly accurate here, particularly in relation to the often impenetrably dense, intellectualized music the Body have been known to release. There's a beat over this that you might actually call danceable, and the Body's patented shrieks eventually give way to like, an actual melody. This is no one's idea of accessible, but coming from this band it at least marks a turn towards accessibility. That's probably the most surprising thing they could have done at this point.

The Body were just announced as part of the lineup for Moogfest 2016, and they'll be playing Netherlands metal fest Roadburn in April, but no other tour dates have been announced at the moment. Listen to "Shelter is Illusory" below.