The Body's All The Waters Of The Earth Turned To Blood 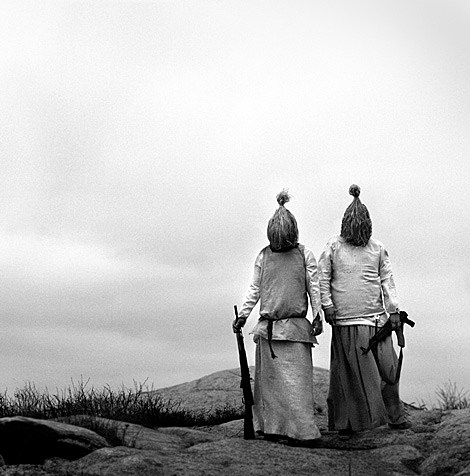 The Providence brotherhood known as The Body have balls. Not only in a more conventional wall-of-sovteks-and-sunns way, or in a literal sense, but in the way that's hardest to come by... ambition and untainted devotion towards evolution in their sound.

Over the course of many releases, The Body have never been the type of band that fit neatly into any sort of doom metal mold, but with their new LP All The Waters Of The Earth Turned To Blood, Chip King and Lee Buford are throwing in the kitchen sink. Aphex Twin style electronic stutters, odd and off-putting auctioneer-style chanting, piercing noise-squalls, a 32 piece chorus, and ambient soundscapes, all punctuated with riff after riff of unmitigated guitar violence.

One of the mildest cases of cross-infection on All The Waters... is "A Curse". Download it above. Starting with an almost post-rocky intro that Russian Circles could turn into an entire song, "A Curse" devolves into a cacophonous black metal rager before breaking for the bowel-shaking riffs that The Body is most known for on the live circuit. (By the way- they are fantastic live, as I witnessed a few times, most recently with Dark Castle at Lit).

One of the most unrelenting, riveting, odd and just plain special records of the year. Get the vinyl now via Blue Collar Distro and look for the CD on the great At A Loss!

The Body are heading out on the road for US tour and are still working on scheduling dates. If you are interested in having them in your city, hit them up at thebodybooking AT gmail DOT com.

Full tour sked (just dates and cities) and some videos are below.