"bomb scare outside killfest 2010 at nokia theater in times square.. mayhem inside and out" - John 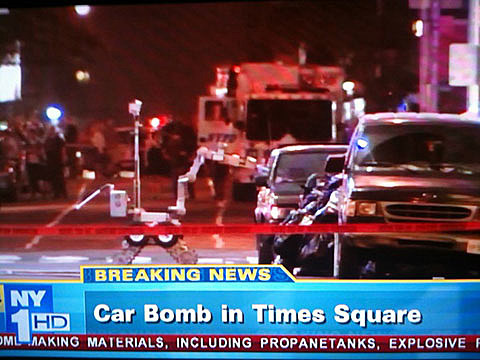 "There were gas cans and bomb making materials in the car," Mayor Michael Bloomberg told reporters early Sunday morning. "Who abandoned the car and why are under investigation."

The shutdown began late Saturday when a foot patrol officer saw smoke coming from a box inside the car with Connecticut plates on 45th Street between 7th and 8th avenues. [CNN]

Though some weren't able to get to the show due to Nokia Theatre's Times Square location (Broadway between 44th & 45th), Overkill, Vader and the other bands on the Saturday night metal bill, did play. John says, "yea the concert went uninterrupted just had to talk my way past police line. overkill, vader and god dethroned were on fire." BlueEyedDevil had less luck. He wrote that he "was enjoying a great afternoon in the city and walked to TQ to find it barracaded off. Just got home and what a f'n waste. Would have been a great time." Sucks, but at least nobody was hurt.