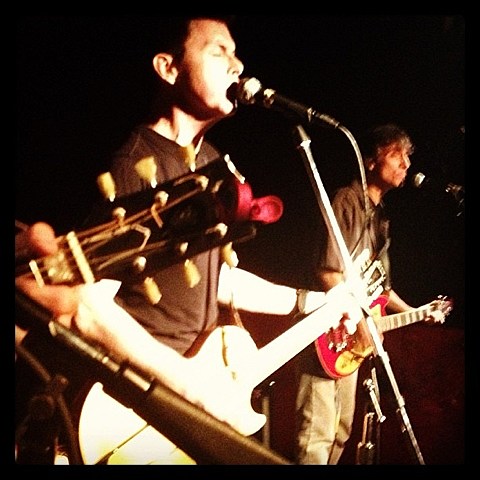 Once the Bongos were on stage, Richard Barone introduced the group the way he did back in the Eighties - "We're the Bongos from Hoboken, New Jersey" - and got a rousing cheer from the capacity crowd. Guitarist Jim Mastro (now the owner of Hoboken's Guitar Bar and Guitar Bar Jr.) looked dashing in a cowboy shirt and straw boater, while Barone changed into a black button-down shirt and tie for the set.

After ripping through the bouncy power-pop tunes that helped the Bongos gain national attention and a major label record deal, Barone announced that JEM Records would be releasing a hitherto-unheard Bongos album, recorded but never released back in the late Eighties, on October 1.

As the set started to wind down, the band brought owner Todd Abramson and his mentor and predecessor, Steve Fallon, to the stage, along with Ira Kaplan and the Feelies' Glenn Mercer. With Mercer at the mic, everyone in the room sang along to a spirited version of the Velvet Underground's "Rock And Roll." [NJ.com]

Legendary Hoboken rock club Maxwell's officially closed its doors last night (7/31) after being open for over 30 years. It did go out with a bang though. After hosting a number of great shows from artists who came to bid their farewells over the last couple months, yesterday there was a closing block party (which Ira and Georgia from Yo La Tengo DJed) outside and two shows inside. The first was an early show with one of the first bands to play Maxwells, The Individuals, and Delicate Steve. Then the very final show was another of the first bands to play the venue, The Bongos, and the actual first band to play, "a" (whose lineup included members of The Bongos and The Individuals). The above review is from The Bongos' set. Pictures from that show are coming soon.

As mentioned in that review above, the newly-reformed Bongos will release a previously-unheard album on October 1 via JEM Records. It's called Phantom Train, and was initially recorded as the followup to 1985's Beat Hotel, but never finished. They just released the first single from the album, "My Wildest Dreams," which certainly sounds like it was written in the '80s, but also sounds very fresh (and pretty damn awesome). Listen to it over at SPIN.