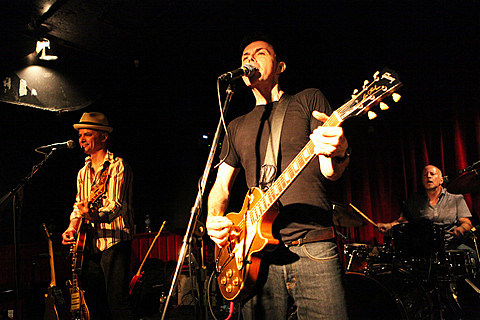 Hoboken scene vets The Bongos reunited for Maxwell's final night as a club and have kept going. The band's "lost" album, Phantom Train, finally saw release last week (10/1) after nearly two decades of half completion. Frontman Richard Barone talked with NJ.com about it:

"There was a lot of very time-consuming work that had to be done to listen to all those different takes and none of us had the time to do it back then," he said. So weeks became months, and months became years, And the years stretched into decades without Phantom Train ever being finished.

Barone finally found the impetus to complete the project when old friend Marty Scott announced that he wanted to restart his old label Jem Records (which had released Drums Along The Hudson in the U.S.)

"It really took a lot of time," Barone explained. "First those old tapes had to be baked in a convection oven so they wouldn't fall apart. The companies that made recording tape in the old days did the right thing for the environment by leaving out certain chemicals but what they did was bad for the longevity of the tape itself. Once the tapes had been baked, I was able to transfer them all to digital and then get to the process of mixing everything down."

You can stream a few tracks from Phantom Train below.

With the new album out, The Bongos plan on continue to play shows. They'll be at CMJ next week, playing The Living Room on October 15. Their set is at 8 PM and the other bands playing that showcase are Quiet Company, Black Boys, Popular Culture, and my education. Tickets are on sale, or you can try and get in with your CMJ badge or Evening Showcase Pass if you have one of those.