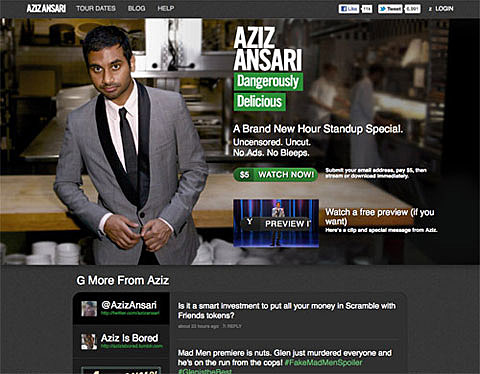 Hey guys. TGIF right? It has come to my attention that the comedy line up for the 11th annual Bonnaroo Music and Arts Festival has dropped and boy is it something (awesome). Folks attending the comedy portion of the fest are sure to get a Boner-oo, that's for sure. The indoor and air-conditioned Bonnaroo Comedy Theatre will feature appearances by Aziz Ansari, Steven Wright, Marc Maron, Brian Posehn, Reggie Watts, Judah Freidlander, Rhys Darby, Colin Hay, Garfunkle & Oats, Amy Schumer, Pete Holmes, Rory Scovel, Mike O' Connell, Ali Wong, and Kyle Kinane. Holy. Cheezus. Read that list again. Digest. Read it again. Digest some more. There is so much goodness in that list it almost makes me sad that I don't have the $$$ or the strength to go to Bonnaroo.

Former staple of the NYC comedy scene Aziz Ansari has been on a relentless and neck-breakingly fast rise to super-stardom and sells out some of the countries largest theaters. I love him ever so much and he is a whopper of an asset to the line-up. And in case you didn't know, Aziz followed in the footsteps of comedy pioneer Louis CK by offering a download of his special Dangerously Delicious for a measly $5. Meanwhile catch Aziz on tour and at the Bonnaroo-related Googa Mooga thing happening in Brooklyn.

Marc Maron? Awesome. A living legend. Phenomenal stand-up pro and host of one of the best podcasts in this stinking, rotten world: WTF. You can also catch him live in New Brunswick four times in April.

Steven Wright is yet another living legend of stand-up. He's been in the biz since 1979 and his style and delivery has given birth to some of the best bits and one-liners in the history of stand-up (here's an exhaustive list). He bridges a seriously important gap between the current alt/indie/whateverthefuckyoucallit-comedy scene and the old school.

Y'all even get a dose of Men At Work front-man Colin Hay who will play songs and share hilarious stories. I actually have two friends who shared drum duties with Hay on a recent tour and I got to have dinner with the guy. The dude's got some ridiculous stories and, man, can he tell 'em. You can also catch him in NYC at Town Hall on April 27th.

And Reggie Watts! A man who just announced a huge tour that includes a headlining gig at the rather large Webster Hall.

And Pete Holmes! Didn't I just get through telling you that Pete is awesome and even has a show coming up in NYC that you should not under any circumstances miss? Yes, I did.

Anyhow, this is one line-up I'd sure pitch a tent to see and you should take time out of your noodle-dancing schedule to check some or all of it out. Have fun!

A bunch of other dates are listed below...