The Books (photo by Nino P.) 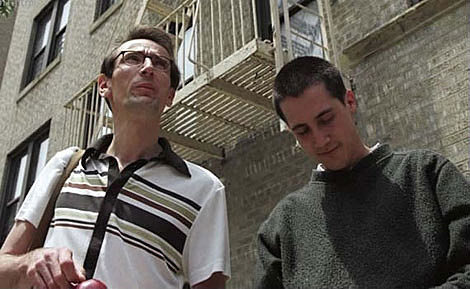 The Books are playing a Thursday, April 9th show at Columbia U's Miller Theatre as part of the duo's short spring tour. Tickets are on sale. All dates below.

The band has been extremely quiet of late, with one high note being its Dark was the Night appearance, covering Nick Drake's "Cello Song " with Jose Gonzalez. As of now, The Books will not be appearing at the live version of Dark was the Night taking place at Radio City Music Hall.

The Books played the 2007 Bang on a Can Festival - the series' first 24+ hour event. The line-up of this year's marathon (May 31, 2009 at the World Financial Center) is still unannounced, but Bang on a Can does have several other fully scheduled events coming up, including a Bang on a Can All-Stars performance of works by David Longstreth, Lee Ranaldo, and others.

The Books - Classy Penguin (other vids streaming on the band's site)

Filed Under: Columbia University, Dark Was the Night, The Books
Categories: Music News, tour dates
Comments
Leave A Comment
Back To Top