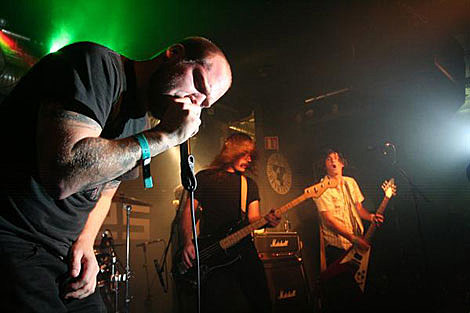 The Bronx have announced a pair of NYC area shows including The Bowery Ballroom on 4/20 with Trash Talk and Maxwell's on 4/22. Tickets for Maxwell's go on sale on 2/11 at noon while Bowery goes on sale 2/13 at noon.

The Bronx are currently touring around Europe, ultimately linking up with Fucked Up and Rolo Tomassi for a brief tour of the UK and then their US tour. One of those US dates, April 5th, is part of the Bamboozle Left Festival in Irvine, CA... an otherwise lackluster festival of mallcore, deathcore, and psuedo-emo feturing headling sets by a reuniting Get Up Kids, (gulp) Fall Out Boy, Taking Back Sunday, and (lord help us) 50 Cent. Full lineup below.

Why even mention Bamboozle Left? Well, besides The Bronx, Kevin Seconds (who has some NYC shows, and a few others... Deftones will make their return to the stage at this show, but with a new bassist...

A LETTER FROM THE DEFTONES

With the announcement of our appearance on Bamboozle, we felt like its time to address some things.

First, Chi.
Our fallen comrade has not made significant progress as of late, but continues to fight on from his accident. Doctors are working feverishly to return our brother to us, and we continue to hold out hope and faith that Chi returns to the life he has waiting for him and can join us on stage once again.

For everyone that knows Chi, knows that he never wanted down time. Chi always wanted to keep working and never slow down, which is why we feel confident in returning to the stage at Bamboozle in April. Chi would want it, and we want to make sure we're keeping his legacy alive.

Back in 1999, Chi had to leave the band for a brief moment and our close friend Sergio Vega filled in to keep the train moving. 10 years later, Sergio is going to step in once again while Chi is down. Sergio is family to us, and had received Chi's blessing before, so without a doubt we know that if Chi could tell us now, he would give us his blessing again.

In the meantime, we continue work on our record, and as for Bamboozle, we felt like we needed to poke our heads up for a quick breath before we buckle down and get this record finished... So we'll see you all in Irvine.

Get well soon, my dude.

Trash Talk are scheduled to play SXSW, as well as the upcoming Scion Rock Fest. We have 10 pairs of tickets and posters to giveaway.