The Bronx at Fun Fun Fun Fest (more by BBG) 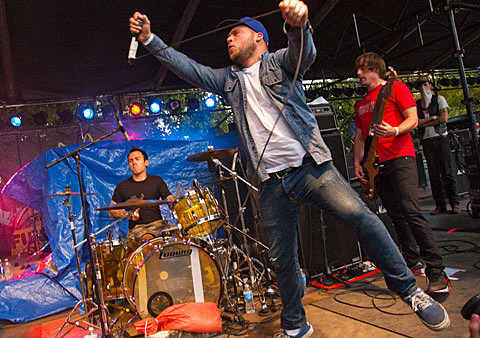 Mariachi El Bronx recently played dates with Devotchka (including two nights at Highline Ballroom), and now the band's punk older brother The Bronx have scheduled a show in NYC aboard The Queen of Hearts on 6/22 (a Rocks Off Concert Cruise). Tickets are on sale.

Both The Bronx and El Mariachi Bronx have some other dates in their near future too. The former is playing a FREE (with RSVP) Sailor Jerry-sponsored show at The Parish in Austin, TX on 5/4, the same month they appear at Sasquatch. The latter is on board for Hangout Music Fest in Gulf Shores, Alabama (May 20-22, 2011). Hang Out Music Fest is heavy on the jam bands, but will also feature appearances from Paul Simon, The Black Keys, The Flaming Lips, My Morning Jacket, Foo Fighters, Motorhead, Cee Lo, Girl Talk, Minus The Bear, and many more over its three days.

Speaking of three day festivals that Foo Fighters, Cee Lo and My Morning Jacket are playing, Lollapalooza just annnounced its full 2011 lineup (in case you missed it).

All Bronx/El Mariachi Bronx tour dates, and some videos, below...