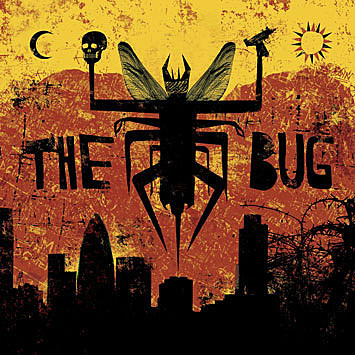 Kevin Martin is a London-based musician, record producer, and journalist. He has been active for over a decade, in the genres of dub, jazzcore, industrial hip-hop, and dubstep. His main projects include God, Techno Animal, Ice, Curse of the Golden Vampire, The Bug, and Pressure. He has collaborated with such figures as John Zorn, Justin Broadrick, Experimental Audio Research, El-P, Blixa Bargeld, Alec Empire, Dälek, Vast Aire, Anti-Pop Consortium, DJ Vadim, Cutty Ranks, Flow Dan, Mark Stewart and Keith Levene. [Wikipedia]

The Bug's album London Zoo was released on August 12, 2008 and is currently ranking #3 on Metacritic's list of best albums of 2008. The Bug will be joined by Warrior Queen tonight (10/3) at Sub Swara at Love in NYC. All dates and some videos below...

The Bug live with Warrior Queen