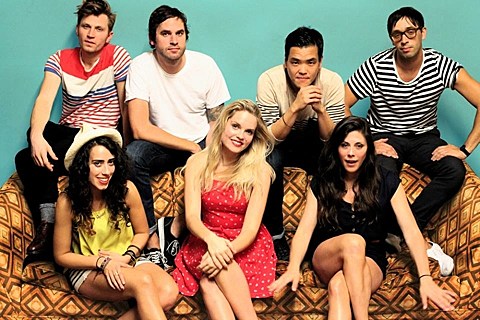 Brooklyn's The Cabana Kids (featuring ex-members of International Affairs and Linfinity) have been playing around their hometown for a little while now, and they'll be putting out their debut EP, The Birds & the Bees, this fall via Small Plate Records. Its new single "Just Let Me Know" is the kind of sunny indie pop with bright, upbeat acoustic guitars and charming male/female vocal harmonies that were commonplace in mid-2000s indie rock. If you miss that kinda stuff, this song should trigger some heartwarming nostalgia. It premieres in this post and can be streamed below. Here's what singer Joseph Lee had to say about the EP:

The songs on "The Birds & The Bees" were originally written on a lark for a project that I envisioned with a female voice in mind. Kind of a hipster Sonny And Cher [laughing]. She would sing the girl's perspective and I would sing the guy's. The topics touched on things that we all experience in life, particularly, the yearning for love, heartbreak, the romanticization of a better place and even death. Being able to provide the different views from a guy or girl's perspective made it all the more interesting. It allowed for a call and response style which easily translated to harmonies as well. Being a huge Beatles, and early rock n' roll fan, the influence of their melodies and chord structures fit perfectly with the vocal stylings. My friend Curtis Williams who laid down the lead guitar and is co producer on the E.P. began recording the tracks at his home studio. Having added some reverb soaked surf guitar tones we had most of what you hear. I then took the tracks to Carousel Studios in Greenpoint and fleshed them out further with Joe McGinty [Loser's Lounge, Live Keyboard Karaoke, Psychedelic Furs]. Joe has got quite the collection of vintage keyboards, and organs which we certainly took advantage of. The only track that was recorded separately was "You & Me" which was done in a day with Jason Finkel of Converse Rubber Tracks and Sweet Sound Studios. With the songs completed, some starts and stops along the way and eventual band members added we were signed by Small Plates Records and look forward to sharing it all with you.

The band doesn't have a hometown show announced at the moment (though presumably it won't be long before one's added), but they will be close by for a show at Montauk's Surf Lodge on Thursday (8/14).

New song stream and the EP's Beach Boys-referencing artwork, below...