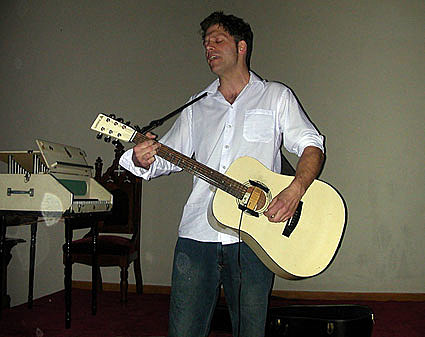 I think The Capstan Shafts then visited NYC soon after to play a small CMJ-related show. I have no idea what the Jandek-like Dean Wells has been doing since. Probably writing music...

With over 17 releases since 1999 (self-released under his own Ladder The Xmas Monkey and through labels such as Asaurus and Yellow Mica), describing The Capstan Shafts as steadily prolific would be an understatement. However, until now, there has never been a properly distributed release, although word on Wells' deliriously prodigious recordings has been percolating in the indie pop underground and building momentum with each new release. The band has signed to Rainbow Quartz in 2007 to release a brand new 29-track LP, environ maiden. (Think early GBV meets Lou Barlow with a dash of the entire Elephant 6 collective.)
[from an October 2007 press release]

I do know what The Captain Shafts is doing tonight (Aug 28, 2008) though. He's playing a show at the Knitting Factory in NYC with the great Charles Bissell of the Wrens and Get Him Eat Him, WHO, is fronted by Captain Shafts fan and Pitchfork writer Matt LeMay.