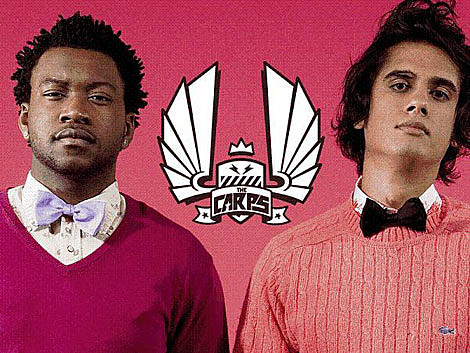 The Cool Kids are riding their "Black Mags" all the way into the Blender.... Theater, I mean, when they hit the NYC stage on Oct 21st. Tickets are on sale. Also playing the CMJ show: Free Sol, (the artist formerly known as Mad) Skillz, and The Carps.

The Cool Kids are also on board to support the Abstract Incognito aka Q-Tip when he hits the Nokia Theater on Dec 2nd! The show show is part of a TBA 2K Sports Bounce Tour. Tickets for the NYC show go on sale 10/18 an noon.

And as discussed, The Cool Kids recently dropped "Delivery Man" as a free download. Matt and Kim are giving away a song at the same site.

This isn't the first time that The Cool Kids & The Carps have crossed paths... the two crews have toured Europe together in addition to their collaboration on the "Heaven's Gate Hell's Flames Remix" from earlier in the year (download that above).

When The Carps aren't touring with The Cool Kids, they can be found promoting their Waves and Shambles EP which dropped earlier this year, and they'll be keeping, like totally-super-busy during CMJ this year - 5 shows busy to be exact. And one of them... is...well... (we'll get our act together soon and announce the whole thing, I promise)...The Carps are the first (ok, second) officially announced artist for our BrooklynVegan Day Party on Oct 25th at the same venue Q-Tip recently played a free show. Stay tuned for more details. There are lots of them. Check out more free tracks at the RCRDLBL links above. Check out more dates below...