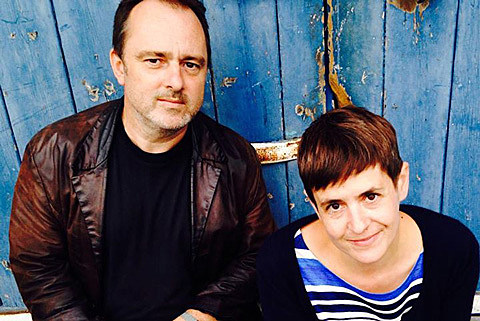 Amelia Fletcher and Rob Pursey are indiepop icons who have been at the heart of much-loved groups such as Talulah Gosh, Heavenly, Marine Research, and Tender Trap. Their latest musical venture is The Catenary Wires. Where previous bands have been decidedly poppy and brash, The Catenary Wires make melancholic folk, but still with their knack for melodies. Their debut, Red Red Skies, will be out June 1 via Matinee/Elefant and we've got the premiere of the video for "Throw Another Love Song on the Fire." Amelia and Rob say "we thought we'd celebrate [the new album] by destroying our very first guitar." Check it out (warning: "mild axe violence"), and stream a couple other songs from the album, below.

As mentioned, The Catenary Wires are playing their first U.S. shows next week, appearing at NYC Popfest, playing May 29 at Cameo with The Loft, #POUNDSIGN#, Papa Topo, Jessica & the Fletchers, and Pale Lights (tickets). Before that, they'll play a free in-store at Rough Trade on May 27. Doors are at 6:30 PM for that with the show starting at 7 PM.

Those are The Catenary Wires' only North American dates, but they do have ones in the UK as well. All upcoming dates are listed, along with the video, below...