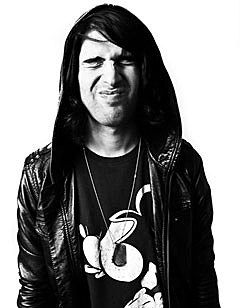 Denver's Kamtin Mohager is The Chain Gang Of 1974, a one-man band whose retro synthy music is well represented in the atmospheric "Don't Walk Away", the closing track on his recently-released album "White Guts". Download it above.

I also couldn't think of a better first-of-three opener for this Friday night's free show on Governors Island which is being headlined by Caribou and also features Phantogram on the bill...

If you miss it, Chain Gang of 1974 can also be caught one night later at Brooklyn Bowl. It's a late show that is also being billed as an "MIA CD Release Party".

All dates and a video for another song on the album, below...