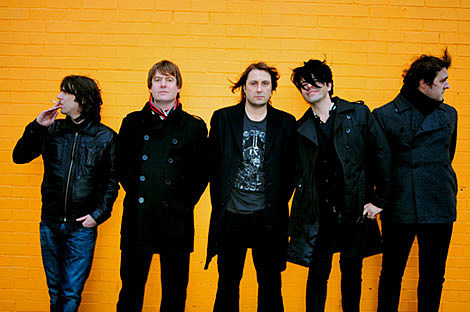 The Charlatans UK, one of the most successful British bands of the last 20 years, will be touring North America this fall including stops at Music Hall of Williamsburg on September 26, Bowery Ballroom on September 29, and Maxwell's on September 30th. Tickets for all three shows go on sale Friday (5/29) at noon, and the NYC shows are on AmEx presale now. The band will be over supporting the belated American release of their 10th album, You Cross My Path, which was originally released for free as a download from British radio station XFM's website in October 2007.

Though only really heard on alt-rock and college radio over here, The Charlatans (forced to put the UK on their name after legal threats from a '60s psychedelic band with the same name) are bona fide stars in Britain, with nine Top Ten albums and 22 Top 40 singles. They've survived the Madchester scene that spawned them, the 1996 death of keyboardist Rob Collins (whose Hammond stylings was the band's signature sound), the Britpop mid-'90s and beyond. The band briefly dropped the "UK" from their name in the States for their third album, Up to Our Hips, after the American Charlatans gave up the legal battle, but voluntarily started using it again when they found that U.S. fans weren't sure if they were the same band or not. Weird but true.

Mop-topped singer Tim Burgess, who lives in L.A. now and turns 42 on Saturday, has an occasional solo career as well, plus an even more occasional side project/supergroup, The Chavs, whose members also include Dirty Pretty Things' Carl Barat, Primal Scream's Marin Duffy, Klaxon Jamie Reynolds, and Razorlight drummer Andy Burrows.

All Charlatans UK tour dates and some videos after the jump.

The Charlatans UK - "The Misbegotten"

The Charlatans UK - "Then"

The Charlatans UK - "Just When You're Thinking Things Over"