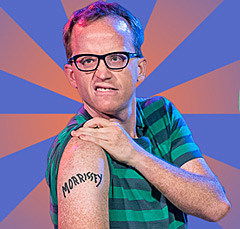 After filming a pilot with Comedy Central that didn't get picked up, public access / internet sensation The Chris Gethard Show has been picked up by new cable network Fusion who have ordered a 10-episode run that will air starting in April. Fusion looks to keep the show's anarchic spirit intact. Gethard says "We're not leaving public access, we're taking it with us." And from a feature in The Atlantic:

The fact that viewers can call in, for one, is critical to the show's energy, which is difficult to pull off on a major network since even late night is filmed live-to-tape. Gethard says Fusion seemed much more willing to embrace the show's online side, live-streaming the tapings and accepting live calls, then editing the show down to something it can broadcast. "Really, we can take our time to have the show basically be live and also round it out to a show we're proud of," he says. "They're giving us an opportunity to have the best of both worlds in a way that's truly progressive. They suggested it."

Chris, who's on Broad City too, wrote this on the show's website:

When Next You See Us We Will Be Standing Atop the Rubble Of The Entertainment Industry, Victorious Conquerers In A Strange Land That's Never Welcomed Us. We Are The Outsiders. We Are The Renegades. We Are The Surrogates For The Silent Masses Who Are Not Willing To Be Treated As A Number, Who Are Smart Enough To Know That Their Value Is Rooted In More Than What Demographic Some White Male In A Suit Categorizes Them In. In April We Take To New Airwaves To Shout Furiously On Behalf Of The Sad, Creative, Sexually Confused, Generally Forgotten Kids Who Have Long Found It Unpleasant To Shout For Themselves. We Are A Voice For The Voiceless. We Take To The Grid So That We May Speak On Behalf Of Those Who Opt To Live Off Of It. We Are The Nervous System, And Our Viewers Are The Heart And The Brain. We Aim To Obey The Commands Of The Meekest Voices Amongst The Din. We Are Selling Out, But We Will Never Back Down. We Thank The Powers That Be For Our Seat At The Table But We Refuse To Ever Be Cool And We Insist On Making A Mess. Some People Get Invited In The Front Door. Some People Sneak Through The Back Door. We Are Sleeping In A Tent In The Vacant Lot Next Door And Throwing Eggs At The Metaphorical House. This Is Not Goodbye, It's Only See Ya Later. This Is Not The End, It Is The Beginning. MNN Was Where The Forces Gathered, And Now The Army Marches. And You, The Viewers Who Have Supported Us, Are The Generals In That Army, The Admirals On The Ships, You Tell Us When It's Time To Push The Button And Go Nuclear On The Whole Venture. The Mainstream Entertainment Industry Murdered Andy Kaufman And It Is The Duty Of This Show To Get Revenge On His Behalf.

One drawback, for fans in Gethard's NYC area (where the show currently films), is Fusion isn't carried by Time Warner Cable. But you will be able to watch it live online, and Fusion can, however, be seen on Verizon FIOS, who by the way recently picked up Diddy's music channel Revolt TV a year into its existence.

Last night (1/28) was the final episode of The Chris Gethard Show to air on NYC public TV channel Manhattan Neighborhood Network and featured a live performance by The Weaks. That episode hasn't shown up archived on line yet, but you can watch last week's episode, featuring Jersey band Microwave Death, below...