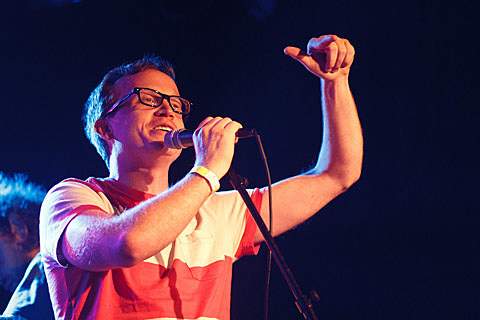 It goes without saying that Chris Gethard is one of my favorite comedians in the biz these days. Not only that, he's a favorite of just about everyone here at BV HQ. Over the past few years, Gethard's popularity has been on a steady trajectory upwards and I've been enjoying his explosion with butt loads of pride, joy, and glee. Between his now legendary cable access show The Chris Gethard Show, his relentless and always fresh live gigging all over the place, and of course his book A Bad Idea I'm About To Do, this dude is never not dominating. And now it appears he will be taking his comedic dominance to Comedy Central as it was just announced that Comedy Central ordered, no, DEMANDED, a pilot of The Chris Gethard Show! which will be produced by Funny Or Die and Zach Galifianakis. From Deadline.com:

Wondering why Chris is making this move? He lists the many reasons he is and isn't doing it, at his website.

Meanwhile, catch Chris Gethard live on December 28th at Shea Stadium (if you have a ticket because it's sold out) as part of the BrooklynVegan Holiday party with Chris and The Front Bottoms.

And it wouldn't be a Klaus article if I didn't editorialize and ponder, so here goes: Besides the fact that The Chris Gethard show is consistently hilarious, unique, and interesting, there is something very novel and important about the show's current home on Manhattan public access which I think is what makes the show so goddamned appealing. And although this is CERTAINLY awesome news for Gethard and his cast of pals in terms of bouncing into the big leagues, I have to wonder if the show's endearing lo-fi character will be destroyed by the monster that is Comedy Central. I mean, WE ALL SAW WHAT HAPPENED TO WAYNE AND GARTH, right!?