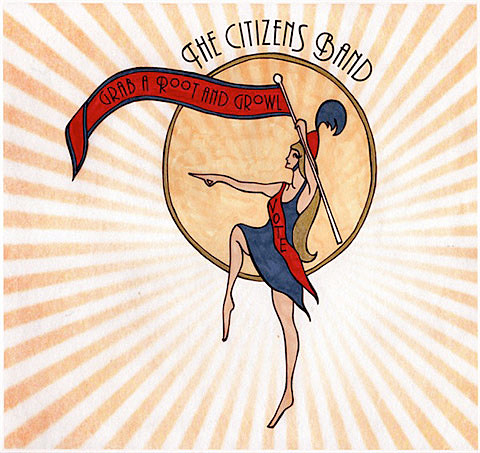 In this fiercely divided election year, The Citizens Band is releasing Grab A Root and Growl, a musical call to action for those discouraged by the increasingly vitriolic campaigns across the country. Over 16 tracks of classic interpretations and original songs, the band declares war on apathy, and seeks to remind the country why democracy matters.

The Citizens Band currently has snippets of Grab A Root and Growl streaming at their webstore, where shockingly you can preorder your copy as well. In addition to the upcoming release on this election year, Citizens Band will also take to the streets with shows in NY and LA in the coming months. Look for the band to play Los Angeles on 9/19 at Avalon and a four day residency in NYC at Abrons Arts Center 0n 10/24 - 10/27 (tickets). The Abrons Art Center site lists members of The Citizens Band (including Karen Elson, Zoe Kravitz, Nina Persson, Rain Phoenix and many many others), but not contributor Craig Wedren (Shudder to Think, etc). No word on if he'll be in attendance at the NYC or the LA dates.

While we're on the subject of Dischord Records alumni, a reminder that the members of Ian Svenonious' great late-'90s mod band Make-Up will reunite to play ATP I'll Be Your Mirror on 9/23. In addition, the band will also play a one-off date in their homebase of DC at The Black Cat on September 20 (tickets).

And finally while we're on the subject of Dischord, the previously discussed Salad Days documentary on DC punk rock is hopefully coming to fruition, that's if they raise enough funds via kickstarter.

Your donations will offset the upcoming costs of editing, animation, graphics, mastering, color correction, sound editing, travel and more. We have a daunting task ahead of us--and yet we're so passionate about telling this story that we're anxious to share it with the world as soon as we can. We hope SALAD DAYS will see a Q3 2013 release and we have high hopes for its festival run. Thanks in advance for your support--we can't do it without you!

Best of luck to Salad Days who is currently at close to 6k of their 32k goal with 29 days left to go. Head below for a video on the project and to kickstarter to contribute.