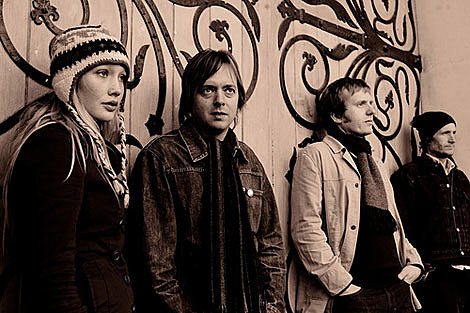 Wispy Brits The Clientele play Music Hall of Williamsburg in Brooklyn on July 19 with Richard Buckner opening. Tickets are on sale. It's a quick stop in NYC for both artists who will be on their way to the Merge Twentieth Anniversary Music Festival which happens in Carboro, North Carolina from July 22-26.

Superchunk and Versus have a similar pre-XX Merge stop planned in NYC at South Street Seaport on July 17.

The Clientele have also finished recording their new album for Merge which is titled Bonfires on the Heath and should be out in October. Frontman Alasdair MacLean recently talked with Pitchfork about what we can expect. In addition to relating a story of getting dosed with LSD and its affect on the album, he implies Bonfires may be, just maybe, The Clientele's last... 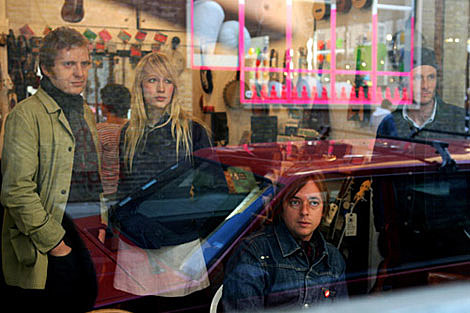 Pitchfork: Are there any new songs that stand out to you right now?

AM: There are a couple covers. One called "Tonight" by a really obscure Swedish band called Evergreen Daze. It's a graceful, last-song-at-the-prom-type song, just full of sadness. And we covered the very first Clientele song we ever recorded, "Graven Wood", which closes off the album. So it's almost of like we're returning to where we had started from.

Pitchfork: Was that odd covering your own song?

AM: It was really emotional because the song was written when we were 17, and I remember when we were thinking it up in a wood while coming down off a fairly heavy dose of, um, something or other. It was very late into autumn, and the last leaves were turning red, and [former member] Innes [Phillips] went home and wrote this song. The lyrics are something like, "Now I recall the reason why you came to stay/ Falling in a dream where nothing stays the same." And that still applies to me today.

To put it much more bluntly-- you just wonder why you bothered. You just wonder whether the choices you made-- to be an artist and make music on your own terms-- trapped you. The deeper you go into yourself, the more chance you have of becoming lost, and I think that's something that plays out throughout this record.

Pitchfork: Does that mean this is the end for the Clientele?

AM: It might do, I haven't really decided yet. I think it'd close the chapter quite well. If you don't have any more ideas you should just go away, I guess. But I don't want to announce that the Clientele is breaking up. It's always up in the air, you constantly have to rethink what you're doing and wonder whether it's courageous enough.

Pitchfork: If this is the end, would you be satisfied with what the Clientele accomplished?

AM: It's a body of work that I'm not ashamed of. We survived generally being ignored in the UK, which I'm quite proud of. A lot of people would have given up if they'd been handed out the kind of treatment we get in our home country.

Though it doesn't really sound that likely it's the end, Clientele fans might want to catch the MHoW show just in case they do call it quits.

Richard Buckner, meanwhile, recently reissued three of his early albums -- Bloomed, The Hill, and Impasse -- digitally on Merge, all of which had been out-of-print. A new album is due next year.