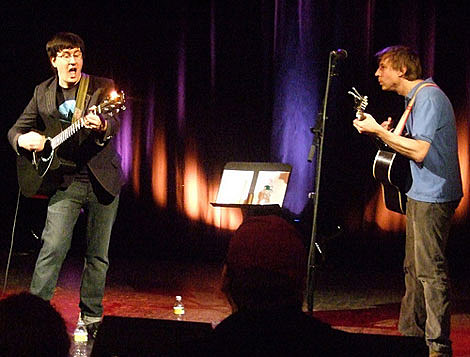 KEXP: I hear you're also recording an album with John Darnielle?

John Vanderslice: Yes, we're doing a "comedian's record," and and that will be out by the time we go on tour in March.

KEXP: What does that mean? Will it be spoken word?

JV: Oh! No! sorry. (laughs) That's the band name [The Comedians]. It would be funny if it were an actual comedian's record, though it might be kind of disappointing, but John is very funny.

That interview was posted in early February, and I don't think John and John actually got the album out before the tour, but they have been performing songs from it at shows - including at the one they played on March 27th at the Society for Ethical Culture in NYC (part of the Wordless Music series). Check out the setlist below.

The Vanderslice/Mtn Goats tour continues through April 6th. John Vanderslice's new album Romanian Names will be released by Dead Oceans on May 19th, and that's right around the time JV will hit the road again, except this time with a full band:

All of the dates and details of that tour haven't been announced yet, but there will be a June 12th Brooklyn show at Music Hall of Williamsburg which will also be the BrooklynVegan showcase at the NorthSide Festival (more artists to be announced soon). $15 general admission tickets will go on sale this Friday at noon, and a certain amount of tickets will be reserved for Northside badge holders (details on that to also be announced soon).

The Mountain Goats/Comedians' NYC setlist, some live videos, and all Vanderslice tour dates, below...

The Mountain Goats @ The Society For Ethical Culture, NYC 3/27/09 - setlist (via)
1 John 4:16
Woke Up New
Song for Tura Satana
Cobscook Bay
Going to Lebanon
Un rêve plus long que la nuit (aka November Love Song)
Going to Kansas
The Last Limit of Bhakti
You or Your Memory
Going to Queens
From TG&Y
Dance Music
The Day The Aliens Came
Ontario (requested)
So Desperate
Color in Your Cheeks (requested)
Sign of the Crow 2
[new Comedians song]*
Surrounded*
See America Right*
No Children
--------------
The Sign

(I don't have John Vanderslice's setlist)