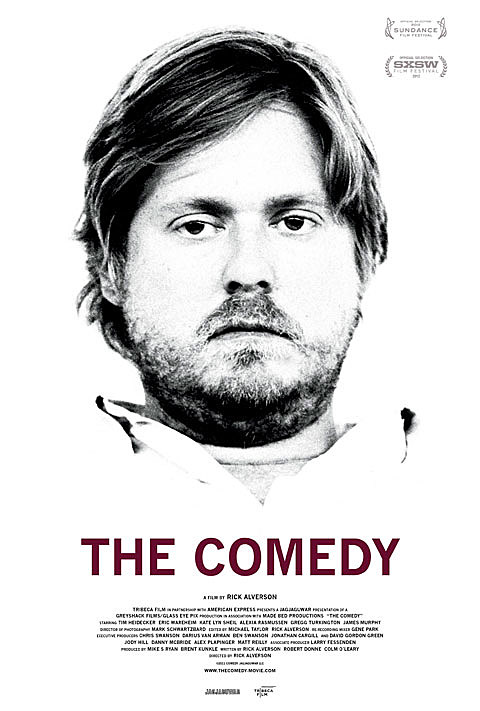 As previously mentioned, new comedy The Comedy also stars Matador-signed comedian Jeffrey Jensen, Will Sheff (of Okkervil River), and many more. You may have caught an early screening of the film over the summer (like at BAMcinemafest), but the flick officially opens this month in limited theaters thanks to Tribeca Film. Check out the full list of locations and dates, along with the trailer and another video clip, below.

Those in LA get a shot at seeing the movie as early as this Friday (11/9) at the Cinefamily where Tim Heidecker will be in person, as part of a Q&A. Can't make that one? The Q&A will also be streaming online.

The film opens in NYC next Friday (11/16) at BAMcinematek in Brooklyn. Heidecker and Alverson will be in attendance for evening Q&As on Friday, November 16 and Saturday, November 17. Tickets are on sale.

You can see it earlier, though, and in Williamsburg where the film takes place. BrooklynVegan is proud to present a special FREE SCREENING of The Comedy at Knitting Factory THIS SUNDAY, November 11. No RSVP required. Doors are at 5 PM and the screening starts at 5:30, first come, first served. Hope to see you there (you can even take the L now if you have to).

You might also want to stick around at Knit after for a special three-year anniversary edition of Hannibal Buress' comedy show for which advance tickets are available and advised ("special guests"). Comedy after the Comedy (and P.S. you can also catch The Comedy actor Will Sheff as part of a Sandy benefit at Knitting Factory tonight)

The Comedy also has a soundtrack coming out next week on Jagjaguwar that includes tracks from Gayngs, Gardens & Villa, Here We Go Magic and Donnie & Joe Emerson to name a few. Full soundtrack listing is below.

The Comedy: "Hitler Had Horrible Indigestion" (Clip) From Tribeca Film