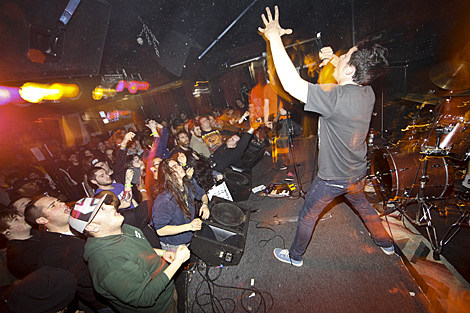 This weekend begins the onslaught of pre-Maryland Death Fest and Chaos in Tejas madness, in addition to ongoing general NYC metal-insanity. And for those of you who are looking to take it the hard way (i.e. go to 10 shows instead of one looong one) there are tons of chances to check out some interesting young bands in heavy music. We talked about quite a few shows on the way already, including the FREE and ALL AGES Trash Talk show TONIGHT (5/21) at Acheron.

Czech death-grinders Ingrowing (their second NYC show in a week) will play The Charleston TONIGHT (5/21), and it's a rager. Featuring Buckshot Facelift, Flourishing, Backslider, the show also marks the return of The Communion, who will soldier on in the wake of the loss of guitarist Lee Altomare:

...after all this, we will be hunkering down and working on new material. we will also be operating under a different name. Lee and I always said that if the Communion ever did a full length, we would call it Kanalbrigade. so as a tribute to Lee, we will be known as KANALBRIGADE. add us on Myspace. also Facebook

Orphan, Dope Body, Child Abuse will terrorize Union Pool TONIGHT (5/21) as well, with the latter playing a show shortly after the release of their new LP.

Zona will host Beau Finley, DBCR, Something About Death or Dying (which includes members of Chambers, The Gaslight Anthem and Spiro Agnew) and Paranoid Critical Revolution for it's monthly shindig at Zona. The Public Assembly show kicks off on Sunday (5/23) at 8PM.

That same night at the Charleston, Tyrhombus Rex will team up with Richmond's Balaclava (who have a killer new release on Forcefield), Elks (who are playing with Cough at Cake Shop) and Mortals for a show at the Charleston.

"Due to solid problems with our local tour promoter and getting our Visa in time, we are forced to cancel the upcoming shows.... We are deeply disappointed by this situation, but in the end there's the awareness, that not everything is done to our entire satisfaction... We owe this to our fans, even more because we made ourselves scarce in the US since the foundation of this band, of course through no fault of our own... We surely will catch up on these shows as soon as possible, which we especially owe to our fans."

As previously mentioned, Europa will host not only the Inquisition show on Sunday (5/23) but also the whopper of a show in Verbal Abuse, Capitalist Casualties, Fang, and Magrudergrind on Saturday (5/22). Want to go to Verbal Abuse? I have THREE pairs of tickets available to giveaway. Details on how to win are at the bottom of this post. The VA show will take place at the same time that Municipal Waste is packing out Fontana's across town.

Some videos and details on the upcoming MADNESS (AKA a list of shows) are below... 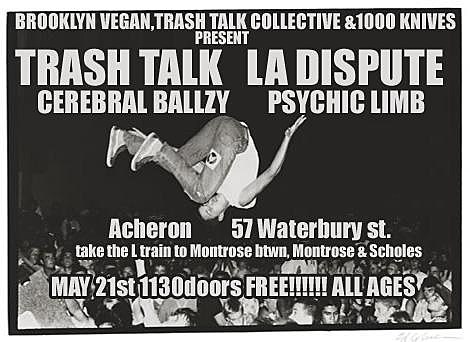